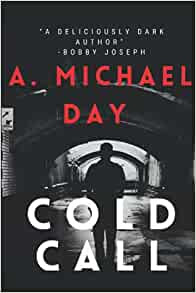 COLD CALL by A. Michael Day, is a Psychological Crime Thriller set in London.

Tyrone Williams is struggling to adjust to civilian life after leaving the army. Plagued by recurring nightmares, living in a run down tower block, stuck in a trainwreck of a relationship, and working for a call centre. Things couldn't get any worse...

After his telephone conversation with Mrs Nowak, Tyrone decides to investigate her for his own personal vendetta, and soon finds himself drawn into London's criminal underbelly. A world of seedy pimps, brothels, and violence. The deeper Tyrone gets, the more he questions whether he's the hero or the villain...

You Never Know Who Will Call...

An enjoyable book, but one which was let down a bit by the lack of a good edit. There are a lot of typos and grammatical errors and a few sentences which are a bit out of place, which kind of detract from an otherwise decent story.

A call centre, a zero hours contract job, a PTSD suffering veteran in a loveless relationship, a struggle to meet sales targets, pressures of life, economics, circumstances, an awkward customer and .... SNAP, something within our main character, Tyrone, a veteran breaks ... an obsession with tracking down the rude customer, a lost relationship, stalking, abusive phone calls, more information on the target, sympathy, a volte face, a desire to help, regrets, shame and very nearly two lives back on track.

Interesting, enjoyable, a bit uncomfortable in places, a few twists and turns, before a decent ending. I liked the main character who is barely hanging onto his sanity and the little he has. It's also a commentary on modern society and the world of zero hours contracts and those barely getting by, only a missed pay cheque away from total wipeout and the loss of any footholds on the bottom rung of the ladder.

I did question the helplessness Tyrone felt at times when confronted by indifference and apathy from his partner at home. He exhibits all the qualities of a door mat, which kind of contrasts too sharply with some of his behaviour later in the book. It's almost too radical a change to be plausible. He eventually gets his bags packed for him, but I think him giving his partner the heave-hoh would have made more sense, when I consider all that follows. Apart from this slight frustration with him, Tyrone fully had my sympathies, as did the object of his attentions, Mrs Novak aka Claire.

We also encounter domestic abuse, prostitution, sex workers and low level criminality. Not a side of London that you would ever really want to see.