A couple of series novels from Kathleen Kent. 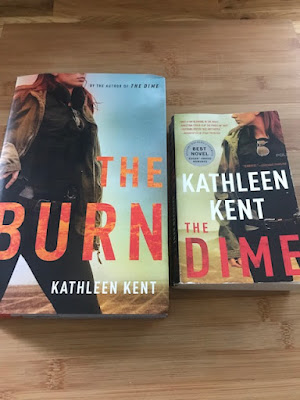 I think I'm going to have some fun when I read these. 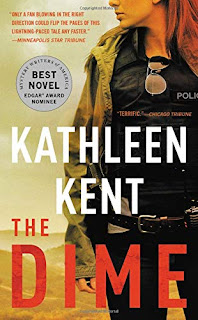 Dallas, Texas is not for the faint of heart. Good thing for Betty Rhyzyk she's from a family of take-no-prisoners Brooklyn police detectives. But her Big Apple wisdom will only get her so far when she relocates to The Big D, where Mexican drug cartels and cult leaders, deadbeat skells and society wives all battle for sunbaked turf. Betty is as tough as the best of them, but she's deeply shaken when her first investigation goes sideways. Battling a group of unruly subordinates, a persistent stalker, a formidable criminal organization, and an unsupportive girlfriend, the unbreakable Detective Betty Rhyzyk may be reaching her limit. Combining the colorful pyrotechnics of Breaking Bad with the best of the gritty crime genre, The Dime is Kathleen Kent's brilliant mystery debut and the launch of a sensational new series.

"Only a fan blowing in the right direction could flip the pages of this lightning-paced tale any faster." --Minneapolis Star Tribune 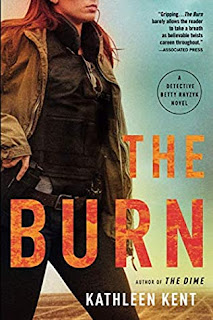 Rattled from a run-in with a cult and desperate for answers, Detective Betty Rhyzyk decides to go rogue -- but her investigation leads straight into the dark underworld of the Dallas drug cartel.

There's not much that can make Detective Betty Rhyzyk flinch. But her wounds are still fresh from an encounter with an apocalyptic cult known as The Family, and she's having trouble readjusting to life as it once was. She's back at work as a narcotics detective, but something isn't right -- at work, where someone has been assassinating confidential informants, or at home, where she struggles to connect with her loving wife, Jackie. To make matters worse, Betty's partner seems to be increasingly dependent on the prescription painkillers he was prescribed for the injuries he sustained rescuing her.

Forced into therapy, a desk assignment, and domestic bliss, Betty's at the point of breaking when she decides to go rogue, investigating her own department and chasing down phantom sightings of the cult leader who took her hostage. The chase will lead her to the dark heart of a drug cartel terrorizing Dallas, and straight to the crooked cops who plan to profit from it all. There's never a dull moment in Dallas, especially now that Detective Betty's back.