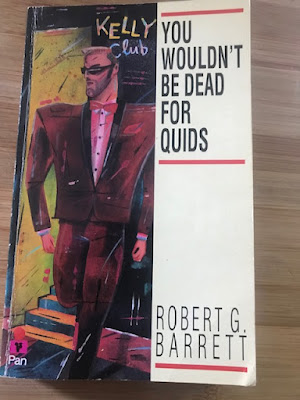 Synopsis/blurb ....
Les Norton has just hit town!
You Wouldn't Be Dead For Quids is an hilarious series of adventures involving Les Norton, a big, red-headed Queensland country boy who was forced to leave his beloved Queensland to settle in Sydney. And that's when the fun starts!
In one of the funniest Australian books of the decade Les is going to introduce you to some of the nice and not so nice people who make up the seamier side of one of the most exciting cities in the world.
He will take you from the golden sands of Bondi to the tainted gutters of Kings Cross where you will meet gamblers, bookies, bouncers, hookers and hit-men and perhaps see a side of Sydney you didn't know about.
With You Wouldn't Be Dead For Quids Robert G. Barrett's anti-hero, Les Norton, is undoubtedly Australia's latest cult figure.
An enjoyable collection of six long short stories featuring nightclub doorman, Les Norton. A little bit dated now and definitely less than PC in some of the attitudes expressed thoughout the book regarding homosexuality and race. Lazy, casual, derogatory insults are hurled usually at friends, as opposed to Norton roaming the streets gay-bashing. Is it a reflection of the author's attitudes at the time, or is he reflecting how blokes bonded and insulted each other back in less enlightened times? I dunno. It's definitely noticeable and a bit jarring, but not enough to send me fleeing from the book.
Most of the adventures involve Les and best mate from the doors, Billy Dunne getting into scrapes. There's a fair bit of repetition throughout the stories, with each punch up displaying Les's awesome fighting abilities ie iron fists and granite chin. No one ever bests him.
Along the way we encounter ... punch-ups, drinking, night club security work, a rescue of a newly married couple from some muggers, a visit from a family member, some over the top descriptions of a dog fight and it's aftermath, a fishing trip, a thwarted hit, a package of drugs, the filming of a TV commercial which descends into a saloon brawl of epic proportions and some sexual gymnastics, with Les somewhat inevitably turning in Olympic gold medal performances.
Despite repetition, dated attitudes and some over exaggeration, I enjoyed this one. Les was good company for the couple of days it took me to read this one. I kind of thought I'll read one story then go to another book, but I found it hard to put down and there was something appealing about the tales.
The collection comprises....
You Wouldn't Be Dead For Quids
A Fortnight in Beirut
Grungle
Bowen Lager
Definitely Not a Drop Kick
Fishin' for Red Bream
4 from 5

I have more Norton adventures on the pile from author Robert G. Barrett. I'm not rushing headlong towards them, but I think I'll probably enjoy one or two more at some point.
Read - July, 2021
Published - 1985
Page count - 240
Source - purchased copy
Format - paperback
Posted by col2910 at 23:27