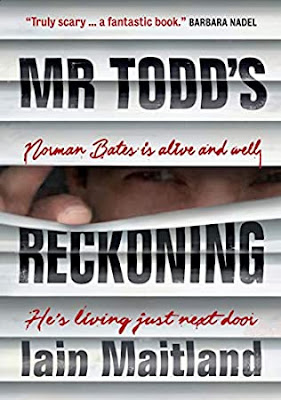 Synopsis/blurb .....
Behind the normal door of a normal house, in a normal street, two men are slowly driving each other insane. One of them is a psychopath.
The father: Mr Todd is at his wits' end. He's been robbed of his job as a tax inspector and is now stuck at home...with him. Frustrated. Lonely. Angry. Really angry.
The son: Adrian has no job, no friends. He is at home all day, obsessively chopping vegetables and tap-tap-tapping on his computer. And he's getting worse, disappearing for hours at a time, sneaking off to who-knows-where.
The unholy spirit: In the safety of suburbia, one man has developed a taste for killing. And he'll kill again.
An absolute cracker. Tremendous storyline, featuring a seemingly ordinary ex-tax inspector relating his current and past difficulties in respect of his career, his son, his marriage, his neighbours and community.
Malcolm Todd is a reasonable man. It's the rest of his world that is troublesome, difficult, inconsiderate and imperfect. They're the problem, not him.
With a superb narration by Michael Simkins we come to understand Mr Todd's world and those that orbit around him ....
the son, Adrian who irritates him beyond belief with his shameful history, bringing disgrace on the family and his oh so annoying mannerisms. OCD tendencies, secrecy, lack of communication. What a crushing disappointment he is. Adrian doesn't seem to be too fond of his father either.
the ungrateful, uncaring wife with her denial of his conjugal rights and her inappropriate friendship with that teaching assistant from school.
the bullies at the tax office, the ones he had to deal with
the stupid young girl from work who led him up the garden path, with her silly texts
his boss with her inability to see what he just had to put up with
the gross neighbours, those big fat lardy arses, with their disgusting habits and raucous singing.
the wife's 'friend' coming around and bothering him and parking opposite his house
Adrian's girlfriend with her unruly brat of a daughter, doesn't she know how to raise a child properly. Hmm, though there is something rather appealing about her.
Monologue, diary entries, reflections, letters to the paper, Ipswich, work, domesticity, interactions, decisions, impulses, desires, anger, actions and consequences.
They were all out of step but Malcolm.
Menacing, broody, disturbing, tense, darkly funny, relatable (upto a point), absorbing and totally satisfying.