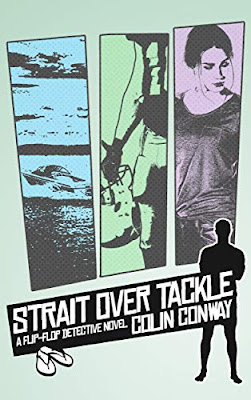 Synopsis/blurb ....
Rule #1 - Only be where flip-flops can be worn.
Former deputy Sam Strait lives his life by a particular set of rules. They provide him freedom to do the things he wants where he wants with whom he wants. For a single man in his mid-thirties, things couldn't get any better. Then why isn't he happier?
When Sam returns home for the summer, he discovers a stranger dead in his boat. With cops and reporters crawling over his property, gone are the usual plans of soaking up the sun and whiling away the days in the arms of a beautiful woman. Instead, Sam embarks on a journey to solve the mysterious death.
Soon, he's being followed, harassed, and assaulted by figures demanding the return of something he had no idea he possessed. Sam would have been better to stay away for the summer, but he couldn't have. He had to return home. The rules demanded it.
Strait Over Tackle is the first book in an exciting new series from the author of the 509 Crime Stories and the co-author of the Charlie-316 series.
If you like your crime fiction with a dose of humor, then pick up this book today!
Strait Over Tackle introduces another new series character from author Colin Conway. Conway has become a firm reading favourite after discovering his co-authored (with Frank Zafiro) Charlie 316 series in the past year or two.
Sam Strait gets caught up in a murder investigation when he finds a young woman, dead on his boat. Some amateur sleuthing (maybe bungling) follows.
An ex-cop, a corpse, a police investigation, drugs, a couple of footballers, a sexy reporter, a lakeside community, a bikini barista, a hard-assed lesbian, an on/off actress girlfriend - who wants more than Strait is offering and has a few jealousy issues, a quarterback, a cop, a friend, a couple of beatings, a burglary or two and eventually an outcome.
It's a busy little book with lots of incidents. I liked the main character and his quirky rules. He has commitment issues which irritate his on/off girlfriend no end. Unlike a lot of PI-type, tough guy investigators with fists of steel, Sam is the complete opposite. On this showing, he'd be lucky to fight his way out of a paper bag. It made a refreshing change reading about someone who gets his ass handed to him on a regular basis. He is like a dog with a bone regarding finding answers to the murder. It's a personal afront to him that the murder took place on his property.
I enjoyed the lighter, humourous touch the author employed. It was an entertaining mystery and I'm keen to read more in the series. If I was being totally honest, I enjoyed the Charlie 316 and Cozy Up books a bit more than this one. Maybe the second - Strait to Hell - has me re-assessing.
3.5 from 5