QUESTIONS AND ANSWERS WITH SARA GRAN

Late last year, I was lucky enough to get the chance to read Sara Gran's latest novel - The Infinite Highway - the third book in her Claire DeWitt series. 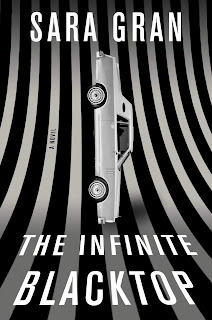 A few semi-coherent thoughts on The Infinite Blacktop here.

With the Washington Square Press paperback now available, Sara was kind enough to answer a few questions for me......

Your latest book, The Infinite Blacktop, can you pitch it to a potential read in a short paragraph? It was my first time reading your work and I really enjoyed it.

The INFINITE BLACKTOP is the third book in my ongoing series about a detective, Claire DeWitt, as she makes her way through life and all of its mysteries.

After City of the Dead and Bohemian Highway, was it an easier book to write than the other two? 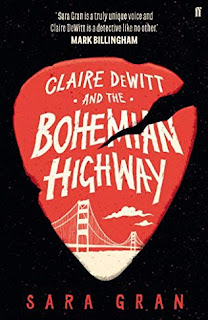 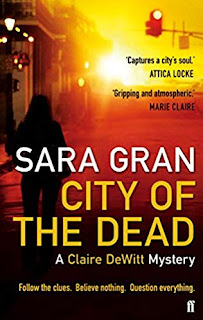 It was much, much harder than the other two, and I will explain why, so other writers will do this in a smarter way than I did: in the first two books, I created a bunch of (very cool!) mysteries and loose ends and secrets waiting to be revealed. So in the third book, I had to start dealing with all those mysteries and complicated plots and secrets and start letting the audience in on what was going on here and how it all ties together -- while also making the book accessible to people who hadn't read the first two. Very uncool! Although I think and hope the result was worth it.

Did it involve a lot of research in respect of the locations of events in the book?

The book takes place in places where I've spent enough time to realistically set something there. I struggle with writing places I haven't been in. I struggle with other writers doing it, too. It's very, very hard to pull off (but not impossible).

How long from conception and the germ of an idea for the story until eventual publication did the book take?

YEARS! I had a a lot of false starts with this book. In addition to the structural problems mentioned above, these characters and this world have become very dear to my heart, so it's very important to me not to take shortcuts and be really scrupulously honest with these stories.

Is Claire’s race run or are there plans afoot for further cases for the “world’s greatest detective”?

There are definitely more Claire Dewitt books coming. But next up is another horror novel, a thriller, and then the next Claire DeWitt.

On your writing in general, do you have a typical writing schedule?
Do you write every day?

When I was starting out, I found that I wasn't really accomplishing what I wanted to accomplish, so I made a rule: any free time, I'd be writing. I wrote on the subway. I wrote on my bookstore lunch break. I wrote nights, mornings, and weekends.

Is the writing a full-time gig? I see from your website you also work in film and television. Does that involve writing as part of a team?

Yes, writing is a full-time job. I write, books, TVs, movies, and occasionally little essays (which generate almost no income, but can be fun). Then there's also all the bullshit around the actual writing: the rejections, the pitches, the talk of book covers, the arguments with editors, and all that. It can be fun to get out there and work with others, but I also very much value days spent writing alone.

When did you last have a cat/fist fight?

I wouldn't say I exactly fight with my cat, but we do bicker occasionally. She really doesn't respect my schedule, or the fact that I pay the bills around here.

Four. I would like to get more but I developed a (minor) autoimmune disorder called lichen planus, which sadly does not involve turning into an actual lichen, but makes my skin scar too easily/unpredictably for more tattoos.

Probably one I cooked myself, although I'm getting better.


Many thanks to Sara for her time.

You can catch up with her on Instagram -  https://www.instagram.com/sara__gran/

and she has a very rare newsletter you can subscribe to at https://www.worldsbestdetective.com/contact


You can get hold of The Infinite Blacktop at Amazon

(and other retailers of course)

Claire DeWitt, the hard-living and tough-talking private investigator, has always been something of a detective. As a young girl growing up in Brooklyn, Claire and her two best friends, Tracy and Kelly, fell under the spell of the book Detection by legendary French detective Jacques Silette. They solved many cases together, in the process witnessing human behavior at its worst. The three were inseparable—until the day Tracy vanished without a trace. That is still the only case Claire ever failed to solve.

Later, in her twenties, Claire is in Los Angeles trying to get her PI license by taking on a cold case that has stumped the LAPD. She hunts for the real story behind the death of a washed-up painter ten years earlier, whose successful, widely admired artist girlfriend had died a few months before him.

Today, Claire is on her way to Las Vegas when she’s almost killed by a homicidal driver. In a haze of drugs and injuries, she struggles off the scene, determined to find her would-be killer’s identity but the list of people who would be happy to see her dead is not a short one.

As these three “eccentric, enticingly artful” (Kirkus Reviews, starred review) narratives converge, some mysteries are solved and others continue to haunt. But Claire will continue her search for the answer to the biggest mystery of all: what is the purpose of our lives, and how can anyone survive in a world so clearly designed to break our hearts again and again?