A quiet month by recent standards with only three opportunities taken to get out and grab a film. They were good films though.


I've been looking forward to this film for a few months now..........the 80s, Bruce Springsteen and Luton - a real dose of nostalgia and a trip down memory lane, having grown-up in the town and having enjoyed Springsteen's music a lot, around the time of Born in the USA album.

The film didn't disappoint. I have the book which inspired the film on the shelves Greetings from Bury Park by Sarfraz Manzoor 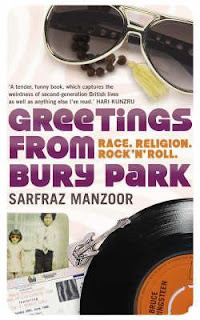 Javed is a Pakistani teenager who experiences racial and economic turmoil while living in Luton, England, in 1987. He writes poetry as a way to escape the intolerance of his hometown and the stubborn views of his traditional father. When a classmate introduces him to the music of Bruce Springsteeen, Javed sees parallels between the singer's powerful lyrics and his own working-class environment. Springsteen's melodies soon inspire Javed to find his own voice and follow his dreams.


I do like Jason Statham as an actor, although it might be fair to say that his range and versatility maybe haven't quite been put to the test. You kind of know what you are getting with his films ...... action, pace, a punch-up or two, a bit of brutality and usually some gun play, as well as a bit of dead pan self deprecating humour. Double the dose here with Dwayne Johnson, someone who has grown on me over the past couple of years. Idris Elba, Vanessa Kirby, Eddie Marsan and Kevin Hart also feature.

A decent night out, entertaining, funny, silly, very OTT with the plot and the stunts - did what it said on the tin.

Brixton Lorr is a cybernetically enhanced soldier who possesses superhuman strength, a brilliant mind and a lethal pathogen that could wipe out half of the world's population. It's now up to hulking lawman Luke Hobbs and lawless operative Deckard Shaw to put aside their past differences and work together to prevent the seemingly indestructible Lorr from destroying humanity.

Much hyped and I bloody loved it.  Features Brad Pitt, Leonardo DiCaprio, Margot Robbie, Al Pacino, Kurt Russell, Michael Madsen (every time I see him, I can't help but remember Reservoir Dogs and his funky switchblade dance to Stuck in the Middle With You.) I quite enjoy seeing Pitt and DiCaprio as they age and get older. They're not quite the pretty boys they used to be.

A great story line, great setting, fantastic acting, a bit of action, a few laughs and quite chilling in places. I found the twist at the back end quite sad and poignant really and I could quite happily have watched it again as soon as it finished.

Actor Rick Dalton gained fame and fortune by starring in a 1950s television Western, but is now struggling to find meaningful work in a Hollywood that he doesn't recognize anymore. He spends most of his time drinking and palling around with Cliff Booth, his easygoing best friend and longtime stunt double. Rick also happens to live next door to Roman Polanski and Sharon Tate -- the filmmaker and budding actress whose futures will forever be altered by members of the Manson Family.
Posted by col2910 at 22:49