A couple from another unread, untried American author - Derek Nikitas 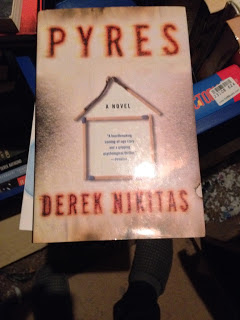 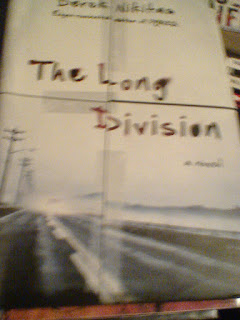 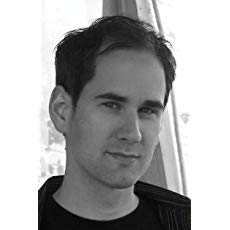 Amazon order history tells me I ordered one of these in June, 2008 and the other in January, 2014. I guess I'm just waiting for the right moment to read these then.

What drew me towards these?

Since these two Nikitas has written a novella/long short story - Runaway (2014) and another novel for YA - Extra Life (2015) ...... discretion being the better part of valour I'll stick with these two for now 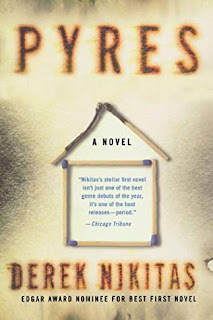 In PYRES, 15 year old Lucia Moberg lifts a CD out of a store in a shopping mall—and when she and her dad get into their car, there is a tap at the window. The next second her father's brains are on the dashboard. So begins the story of the ruin of her mother, whose home life is shrouded in darkness, a mysterious and menacing motorcycle gang, the real-to-life female cop out to crack the case, who is facing her own family's collapse, and the struggle for Lucia to piece together some semblance of a normal teenage life. The writing is hard and crisp, and wholly multi-dimensional, while the story moves along at a nail-biting pace with twists, turns, literary allusions, and the engaging plight of several fascinating, memorable, and fully rounded characters. 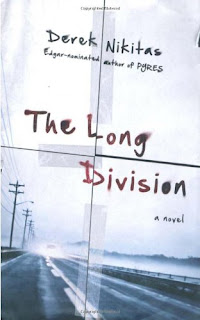 An Atlanta housecleaner flees her nowhere life to reunite with the son she gave up for adoption. The teenage boy joins his long lost mother on an unlawful road trip that proves how much they both have to lose by finding each other. Elsewhere, a deputy must track down the shooter in a drug-related double murder before other investigators discover the deputy's illicit ties to the case. The killer is an unbalanced college kid hunted by vengeful drug dealers and the police, haunted by loves both dead and for bidden. When the renegade mother and son arrive, past sins and present gambits will ensnare them in the violent endgame between the deputy and the desperate killer.
Posted by col2910 at 00:01