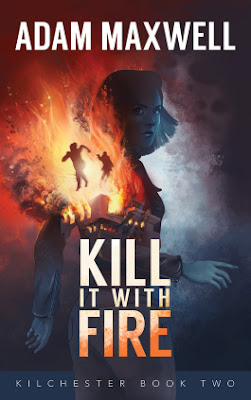 They say revenge is a dish best served cold but some like it hot.

Double-crossed and with her reputation as a master criminal compromised,
Violet Winters means to fight fire with fire.

She doesn't play by other people’s rules, or any rules so hell's fury is about to rain down.

Furious, fearless and fighting mad she is ready to risk her life to save her name.


My second outing in Adam Maxwell's Kilchester in the company of Violet Winters and her gang of villains and another enjoyable caper.

Violet has been ripped off, getting paid for her talents with some funny money, by Kilchester king-pin Elias Croft. With a reputation to protect, payback is an obligation, particularly as Croft with cops on the payroll considers himself untouchable.

A plan, a nightclub, some props, a fire, a mute giant as a capable assistant, some distractions, two cops - one bent, one not, a confrontation, some violence, more funny money, complications and a close run escape.

Plenty of humour, pacey, clever, well-plotted, entertaining characters and not over-long. My kind of book.

I look forward to the next outing for the gang and also seeing our honest cop, Zachary Roach again.

The first Kilchester caper - The Dali Deception was enjoyed previously. As was some of Adam Maxwell's short stories in Dial M for Monkey.