I'm happy to be part of the blog tour for the re-boot of Keith Nixons's Solomon Gray series. Here's my thoughts on the first - Dig Two Graves which is currently available for free over on Amazon. 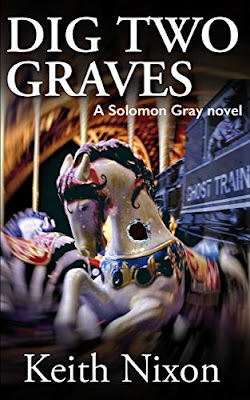 Was it suicide ... or murder? Detective Sergeant Solomon Gray is driven to discover the truth. Whatever the personal cost.

When teenager Nick Buckingham tumbles from the fifth floor of an apartment block, Detective Sergeant Solomon Gray answers the call with a sick feeling in his stomach. The victim was just a kid, sixteen years old. And the exact age the detective's son was, the son Gray has not seen since he went missing at a funfair ten years ago. Each case involving children haunts Gray with the reminder that his son may still be out there – or worse, dead. The seemingly open and shut case of suicide twists into a darker discovery. Buckingham and Gray have never met, so why is Gray's number on the dead teenager's mobile phone?

Gray begins to unravel a murky world of abuse, lies, and corruption. And when the body of Reverend David Hill is found shot to death in the vestry of Gray's old church, Gray wonders how far the depravity stretches and who might be next. Nothing seems connected, and yet there is one common thread: Detective Sergeant Solomon Gray, himself. As the bodies pile up, Gray must face his own demons and his son's abduction.

Crippled by loss Gray takes the first step on the long road of redemption. But is the killer closer to home than he realised?

Set in the once grand town of Margate in the south of England, the now broken and depressed seaside resort becomes its own character in this dark police suspense thriller, perfect for fans of Ian Rankin, Stuart MacBride, and Peter James.


Dig Two Graves is the first in the Solomon Gray series. Pick it up now to discover whether Gray finds his son in this thrilling new crime series.


An interesting series opener with Nixon's Solomon Gray. Gray has issues. The disappearance of his son, Tom ten years ago still haunts him. He holds himself accountable for Tom's disappearance. The aftermath - the decline of his marriage, the suicide of his wife and his ongoing separation from his surviving daughter - are all matters of ongoing regret. He still harbours hopes of finding his son alive and every spare minute is spent on reviewing the case file or exploring new possibilities however unlikely or tenuous. It's fair to say a huge shadow blights Gray's life and his sorrow resonates throughout the book.
The case in hand  - a sixteen year old boy going over a fifth floor balcony, suicide or something else?
This is a police procedural - so something else is the order of the day.
I liked this one, I enjoyed the dynamics of the police force involved in and around Gray. His direct boss is Yvonne Hamson. Her boss Carslake is an old friend of Gray's and the personal connection sometimes irritates her as Gray can on occasion try and circumvent the chain of command. The other member of the team is Michael Fowler. We also have interaction and a sympathetic relationship with the pathologist, Ben Clough .
Other deaths follow and there is also the involvement of a Met Officer in the original case. The dead sixteen year old having had some London links.
The setting is Margate, a Kent seaside resort that has definitely seen better days. That I visited the town itself a year or two ago, lent a certain familiarity to the backdrop. Definitely somewhere I want to return to, though probably only on the written page.
Dig Two Graves is short for a police procedural - approximately 230 pages long - though the novel never feels rushed. Nixon's just gets to where he wants to take the reader without any undue fuss. That said the relationships and characters of the main players are developed and interesting. There is a resolution to the initial tragedy and the subsequent deaths, but there is definitely some unfinished business for Solomon Gray.
4 from 5

Keith Nixon has his website here.
Burn the Evidence is the second in the Solomon Gray series and was read not long after this one.
Nixon also has a couple of other series under his belt - the Konstantin Files and a series with Caradoc, set in Ancient Britain. Some of each have been previously enjoyed.
Read in March, 2018
Published - 2017
Page count - 226
Source - Net Galley
Format - Kindle


The rest of the series is Burn the Evidence, Beg For Mercy and Bury the Bodies
Posted by col2910 at 23:33