QUESTIONS AND ANSWERS WITH TOM LEINS

Skull Meat author Tom Leins is the latest participant for the Q+A treatment. 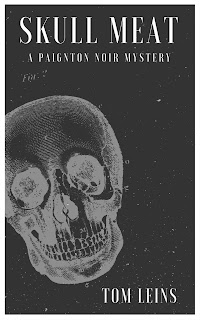 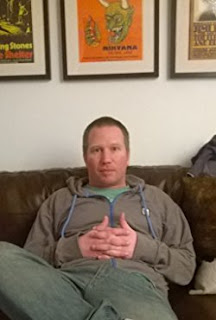 Q. I don’t think the writing is full-time, what’s the day job?

I currently work as an analyst for a telecoms research company. It is far more interesting than it sounds, and I’m happy to say that writing plays a big part. I have managed to make a living out of putting words on a page for more than a decade now: agony uncle, film critic, writer of underwhelming business articles… telecoms has been my favourite subject of all.

Nowadays I try to write three or four evenings a week, depending on deadlines and reviewing activity. That said, I write a lot of notes during the day: random scenes, excerpts of dialogue, character descriptions… my approach to writing is rarely linear!

Good question. Yes, but in a ramshackle way. Anything upwards of 2,500 words I will have an ending in mind. Flash fiction (see below) is a different kettle of fish. It is satisfying when I write a whole short story in one quick burst, but a lot of stuff is stitched together from loose scenes, offcuts and narrative scraps. Whether it’s 500 words or 25,000 words I do like to maintain a three-act structure. That never changes.

Q. How long did Skull Meat take from start to finish? Is it your longest piece to date?

From start to finish? Technically, it took me eight years! An earlier version of the first chapter, ‘Bloody Kisses’, first appeared at A Twist of Noir back in November 2009 (Don’t look it up!). Some of the subsequent material made it into a follow-up story, ‘Bloody Fingerprints’, and another chunk languished on my hard-drive for almost a decade. Assembling the finished version – which includes excerpts that previously appeared on Akashic Books, Straight From The Fridge and A Twist of Noir (again) took less than a week. Ultimately, this is the book I should have written many years ago, when I was less focused, and paves the way for a whole series of Paignton Noir books that have been gestating for a long time. So, yeah, it is my longest published piece, but not the longest thing I have written.

Q. Did it end up as the book you anticipated writing at the start?

You know what? I think it comfortably surpasses what I originally intended back in 2009 (the accessibility of Kindle helps to validate a 10,000 word novelette), and the end-product exceeded my modest expectations. I only started cobbling it together as an exercise in nudging away a stubborn dose of writer’s block – the idea to publish it as a novelette came afterwards.

Q. Can you tell me a bit about your published work to date? You seem to have short stories dotted around all over the internet at various haunts – Shotgun Honey, Pulp Metal Magazine, Out of the Gutter, to mention a few – have you been focussing on this format mainly?

To cut a long story short, I started writing fiction in around 2002, and my first ever story, ‘The Box’, was published by a UK press called Skrev the following year, in one of their Texts’ Bones anthologies. I notched up a bunch of publications in small-scale British literary magazines over the next five years, and switched to writing crime fiction in 2006-2007, when my reading tastes shifted. (Coincidentally, this year marks the 10th anniversary of my story ‘Paignton Noir’, which was published by a Canadian literary magazine called Front & Centre).

I took a break from writing between 2011 and 2014, and have attempted to re-establish myself in recent years. Luckily for writers – and readers – there are a bunch of great crime sites on the web (Shotgun Honey, Near to the Knuckle, Out of the Gutter, Pulp Metal Magazine and Spelk [not exclusively crime, but still excellent]), and I have gained the acquaintance of dozens of top-notch writers through reading their work on the above websites.

The immediacy of flash fiction makes it my favourite format to write, but I’m probably around 100 stories in at this point, so I’m more concerned with finishing off my stack of unfinished novellas right now.

Q. On your website there’s a collection of wrestling themed noir stories – The Good Book – which is close to completion, any updates on that and what format are you going to be publishing that in, assuming you do?

Yes, ‘The Good Book’ is very close to completion – only a few more stories to go. I hope to find a publisher for it in due course, but if no one bites, I’m happy to publish it myself. Despite the dark tone and murderous degeneracy on display, I think this collection is the most sale-able thing I have written to date, so I’m quietly optimistic about finding a home for it!

For readers unfamiliar with this little project, ‘The Good Book’ is an interlinked short story collection set against the backdrop of a chaotic southern wrestling promotion called the Testament Wrestling Alliance. Unhinged wrestling promoter Frank ‘Fingerfuck’ Flanagan rules his territory with an iron fist, but his personal road to hell is paved with dead wrestlers. The stories take place between the mid-1970s and the early-1990s, fit together like a blood-soaked jigsaw puzzle…

The Good Book is another project that has been bubbling away for a long time, before I decided to give it a proper crack last summer (my first ever wrestling story, ‘Other People’s Pussy’, was published by A Twist of Noir way back in 2010). Writing these stories has been a nice change in pace from working on the Paignton Noir material for so long, and has also helped me to engage readers who were previously nonplussed by my work!

My current must-read author is Adrian McKinty, whose Sean Duffy series – about a cop in 1970s and 1980s Northern Ireland – is phenomenal. His earlier ‘Dead’ trilogy was top-notch pulp-crime, but his current series reaches George Pelecanos levels of greatness. Seriously impressive stuff, and I’m looking forward to getting stuck into my recently purchased copy of ‘Rain Dogs’ (Book #5).

My reading habits have changed dramatically over the last few years, and independent crime fiction dominates my Kindle. The last three books I read were: ‘Down on the Street’ by Alec Cizak (ABC Group Documentation, 2017), a grubby little thriller about a cab driver who becomes a pimp; ‘Everglade’ (All Due Respect, 2017) by Greg Barth, which is the fifth book in the tremendous ‘Selena’ series; and ‘Fatboy’ by Paul Heatley (All Due Respect, 2017), which is

enjoyably nasty Americana from a young British writer to look out for. Currently on the Kindle is ‘Black Neon’ by Tony O’Neill (Blue Moose, 2014). The last paperback I read was ‘This Is How You Lose Her’ (2012), a short story collection by Junot Diaz, which was a random charity shop purchase.

Probably ‘The Road’ by Cormac McCarthy, which was brilliant and intense. 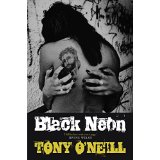 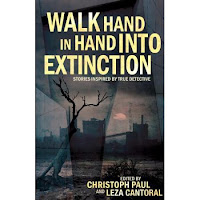 I’m 15 years in, and I still get a buzz when I get an acceptance email from an editor. Getting paid for stories is a great feeling, and getting contributor copies of anthologies that my stories have appeared in gives me a real buzz too. Especially when they are close to my heart, such as ‘Walk Hand In Hand Into Extinction: Stories Inspired by True Detective’ (edited by Christoph Paul and Leza Cantoral) and ‘This Book Ain't Nuttin to Fuck With: A Wu-Tang Tribute Anthology’ (edited by Christoph Paul and Grant Wamack), both of which were published by Clash Books.

More recently, getting positive reviews from my peers – and crime fiction enthusiasts such as yourself – is a real boost. Ultimately, I’m writing for my own pleasure. I know my work is too abrasive for mainstream consumption. Picking up like-minded writer friends on the journey is a big plus.

Probably the rejection. Not a cool response, but an honest one!

Q. What has been the highlight of your writing career so far?

One of the highlights that sticks in my mind was getting long-listed in a short story competition run by No Exit Press, the UK publisher of books by James Sallis, Daniel Woodrell, Robert B. Parker and Edward Bunker. I didn’t make the short list, but it was great to get a slither of recognition from a publisher who I have admired for so long.

The story, ‘A Brief History of Bad Men’, remains a personal favourite of mine, and ended up being published in the aforementioned ‘Walking Hand In Hand Into Extinction’ anthology. I’m pretty sure that it is currently available dirt-cheap for Kindle, if anyone is curious!

The next book which should see the light of day is ‘Meat Bubbles (& Other Stories)’, a collection of Paignton Noir short stories. ‘Skull Meat’ actually functions as a teaser for Meat Bubbles, and will slot in alongside a bunch of loosely interconnected stories. I’m editing it this month, and it should be available via Amazon later this summer, all things being well.

The dreaded work in progress is ‘Boneyard Dogs’, which I’ve been wrestling with for a while. If you liked ‘Skull Meat’, you will love ‘Boneyard Dogs’! This one was started years ago – and always intended to be ‘Year Zero’ for the Paignton Noir series – I think there is definitely more of an appetite for it now.

Here’s the synopsis: Hired to track down the missing teenage daughter of a demented local lounge singer, Paignton private investigator Joe Rey quickly finds himself surrounded dead bodies. The police are determined to pin the murders on Rey, and as his investigation spirals bloodily out of control, it becomes apparent that the real killer may actually be a man he knows all too well… (Like ‘Skull Meat’, it is far more deranged than the synopsis makes it sound!)

Q. What are your hopes for the future, publishing-wise?

If I knuckle down – and quit writing flash fiction (a hard habit to kick, after all these years) – I want to try and put out at least a novella a year. I’ve got ten Paignton Noir novellas either underway, or loosely plotted out – I just want to see them through. My commercial ambitions are minimal, but I think there is a modest market for something darker and nastier than what the British crime fiction mainstream currently offers. Cult status is fine by me, but it would be good to find a publisher that shares my vision. Watch this space!

You can keep an eye on him and his work via his website - Things To Do In Devon When You're Dead.

He also reviews and does other bits and pieces at the blog - Dirty Books
Posted by col2910 at 23:01