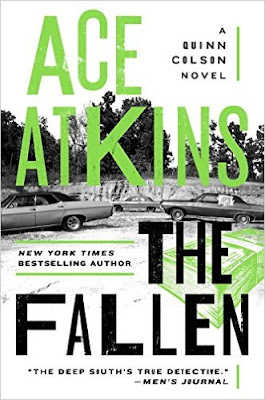 Mississippi sheriff Quinn Colson had to admit he admired the bank robbers. A new bank was hit almost every week, and the robbers rushed in and out with such skill and precision it reminded him of raids he'd led back in Afghanistan and Iraq when he was an army ranger. In fact, it reminded him so much of the techniques in the Ranger Handbook that he couldn't help wondering if the outlaws were former Rangers themselves.

And that was definitely going to be a problem. If he stood any chance of catching them, he was going to need the help of old allies, new enemies, and a lot of luck. The enemies he had plenty of. It was the allies and the luck that were going to be in woefully short supply.

Another read, another new author, another mostly enjoyable book - a solid but unspectacular read in my opinion.

Quinn Colson is an ex-US Army Ranger now serving as a sheriff somewhere in Mississippi. In The Fallen we have a few over-lapping story threads. A series of bank robberies have being taking place in the vicinity and from their execution, Colson fancies that the culprits are ex-military. A domestic burglary, sees Quinn back in contact with an old childhood friend - a rather attractive one and one who is going through a difficult divorce from her husband.

In the background, Quinn's once troubled sister, Caddy her life now back on track is concerned about the disappearance of two vulnerable young teenagers who she met while conducting her work at a church-cum-charity. The girls, who weren't averse to using their bodies as a means of gaining approval have gone off radar and Caddy believes a prostitution and trafficking ring is responsible. Trying to convince her brother to investigate is another matter.

We get some of Caddy and Colson's backgrounds during the course of the tale. An errant father, a difficult mother and some failed relationships and we cross paths with characters which I assume were the subject of previous books in the series. We spend some time with Quinn's close colleague in the police service, Lillie and we observe the tensions in their relationships, both professionally and with some personal stuff.

All the strands of our seemingly separate crimes, inevitably get woven together with different connecting protagonists, each harbouring different motives and agendas for their actions. It was convincingly done, but despite the appeal of the bank robber theme - one of my favourite tropes in the genre I was just vaguely unsatisfied by the overall narrative. 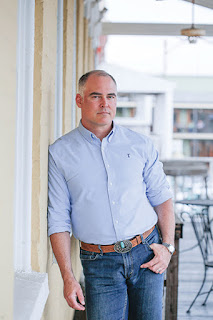 I enjoyed the setting - Mississippi with the odd diversion to Memphis. Colson with his background and his pursuit of romance was an okay character, but not especially memorable or stand-out. He didn't actually seem to do an awful lot of investigating, more kind of showing up after events and reacting as opposed to being particularly pro-active in solving the crimes. Maybe a small town sheriff's role is more crime prevention than detection.

We did have some interesting themes covered in the book which were a plus for me....bank robbery, prostitution, trafficking, domestic trouble and small town politics. They didn't manage to elevate the book above average entertainment though.

The Fallen is the eighth Quinn Colson book in this series. I have something else from it on the pile and while I liked this one, I'm not minded to seek out all previous entries in the series.

I did request this via Penguin Random House's First to Read programme but didn't complete the book in the time I was given to read it before it disappeared from my device. I wasn't particularly enamoured by the format I was reading in, so ending up purchasing a kindle copy to complete.