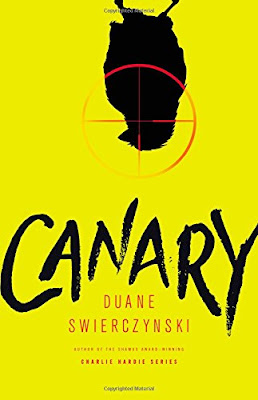 Every student needs a part-time job.

Hers is hunting criminals.

Sarie Holland is a good kid. An Honors student. She doesn't even drink.

So when a narcotics cop busts her while she's doing a favour for a friend, she has a lot to lose.

Desperate to avoid destroying her future, Sarie agrees to become a CI - a confidential informant. Armed only with a notebook, she turns out to be as good at catching criminals as she is at passing tests.

But it's going to take more than one nineteen-year-old to clean up Philadelphia. Soon Sarie is caught in the middle of a power struggle between corrupt cops and warring gangs, with nothing on her side but stubbornness and smarts.

Which is bad news for both the police and the underworld. Because when it comes to payback, CI #137 turns out to be a very fast learner...

My sixth book from this author, though the last time I read him was in 2013 – Fun & Games.

Canary gives us …… a drugs bust, a strait-laced college girl, a dogged detective, a distracted father, an irritating brother, an annoying friend and frequent trips to Philadelphia’s dark side.

Sarie, our heroine is inadvertently caught holding the bag when a friend flees after a drugs purchase is observed by a cop on surveillance. Refusing to give up the identity of her friend (why? I’d have dropped the dime on him in a flash) she ends up as a confidential informant for Ben Wildey, a cop on a mission to clean up the city.

Wildey wants to use Sarie to snag the city’s drugs king-pin. Sarie reluctantly wants to assist him, but more importantly wants to avoid the wrath of her father and the destruction of her promising future.

Bearing in mind I read this over a year ago, I’m a bit fuzzy on the details. I enjoyed the plot; the portrayal of the difficult family dynamics with Sarie’s grief at the loss of her mother and the effect of the death on her father. I bought into Wildey’s enthusiasm for his mission. Swierczynski has some great characters on display.

I liked the near-miss escapades as Sarie helps in the arrest of several criminals, just not the one target that an increasingly exasperated Wildey wants.

Plenty of humour and a fair few twists and turns in the plot. The actual resolution I kind of forget, though it does see father, daughter and brother coming together in a rare display of family togetherness.

I really enjoyed the read and look forward to more from the author in the future. I’ve read his earlier work – Secret Dead Man, The Wheelman, Severance Package, The Blonde and Fun & Games. This one and Fun & Games seem slightly more mainstream than his previous books. A fair few more of his sit on the pile. 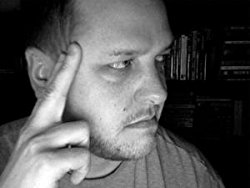 Boring story - he once posted me a book of his about 10 years ago, after I won a competition on his then active blog/website. I think it was Severance Package