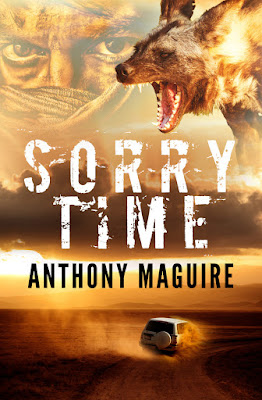 You're driving along a lonely outback road when suddenly a kangaroo leaps out in front of you. Your car is wrecked and then things rapidly go downhill from there as you find yourself under attack from a pack of wild dogs. Having survived that, you cross bloody paths with a pair of violent criminals who've murdered two people on a remote Aboriginal community.

And then things go REALLY pear-shaped as you find yourself caught up on a rollercoaster of bloody revenge that takes you to the other side of the globe and to the edge of madness.
Sorry Time is a breakneck story that offers a rich and entertaining reading experience, and will travel well to film. You'll meet a cast of memorable characters like Glen of the Outback, who claims to be the man in the orange T-shirt in a David Bowie clip, and rat-faced mortuary attendant Mal Kite, who runs a profitable sideline stealing valuables from bodies. And last but not least, the villain of the piece, Ali Fazir, a meth addict with a penchant for beheading. The story is steeped in an ominous, occult sub-current as Dreamtime spirits lash out after the removal of a fabulous opal from an Aboriginal burial ground.

Sorry Time starts with a trip to the Australian Outback with Jonathan Chaseling, a doctor on his way to a new job at Alice Springs. Chaseling, somewhat unwisely uncovers and trousers a buried opal from an Aboriginal tomb and if the folklore is to be believed has just incurred the wrath of some vengeful spirits. A collision with a kangaroo soon after which incapacitates his vehicle, could be the least of his problems.

Anthony Maguire serves up an entertaining adventure as Chaseling is introduced to a welcoming but isolated Aboriginal community, then gets himself involved in a manhunt after a drug-crazed Asian criminal attacks and murders a girl in the community. The consequences resonate through the book with fatal effect on Chaseling’s family and of lesser importance, his career prospects.

An interesting setting, a great sense of place, plenty of Aboriginal culture on offer, plenty of local wildlife and some social commentary regarding historic government practices which destroyed Aboriginal families and communities by separating children from their parents.

In addition, we have a peek inside a criminal enterprise, with a dysfunctional Sydney crime family, one of whom, Ali Fazir when he's not frying his brains with drugs is fantasizing about a life changing trip to Syria where he can succeed Jihadi John as ISIS's chief beheader. We get to see how this particular family deals with its business rivals.

The book meanders a bit at times, we have some distractions with Chaseling's family history and also his meeting with his potential employer, but it all added to the mix and I was happy enough to follow wherever the author was going to take me.

There's more than a few laughs along the way, a bit of sex with an entertaining encounter with a couple of German tourists and some extreme violence. I was kind of shocked by a couple of events in the book, kind of thinking….no - he’s not going to go there. Well he did and somewhat gruesomely. In the context of the story, it was plausible, but I still felt sorry for the victims and by extension their families.

At the climax we have the inevitable showdown between Chaseling and Ali Fazir.

Enjoyable, entertaining, educational in places, a fast paced story, some memorable characters on both sides of the fence – a hero and a villain. All in all, not a bad trip to Down Under with a trip to Turkey thrown-in for good measure. 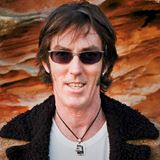