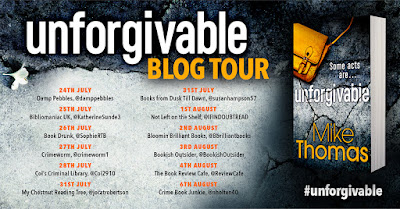 Unforgivable is the second book in his DC Will MacReady series and is out this month.

The first, Ash and Bones (as well as his two standalone novels Pocket Notebook and Ugly Bus) still languish on the burgeoning TBR pile.........UNFORGIVABLE really! 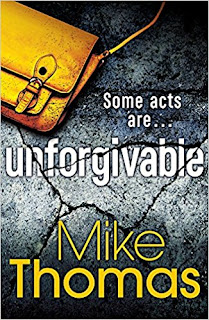 A dark slice of Cardiff crime for fans of TONY PARSONS, JAMES OSWALD and LUCA VESTE. There isn't always a welcome in the valleys . . . Bombs detonate in a busy souk, causing massive devastation. An explosion rips apart a mosque, killing and injuring those inside. But this isn't the Middle East - this is Cardiff . . . In a city where tensions are already running high, DC Will MacReady and his colleagues begin the desperate hunt for the attacker. If they knew the 'why', then surely they can find the 'who'? But that isn't so easy, and time is fast running out . . . MacReady is still trying to prove himself after the horrific events of the previous year, which left his sergeant injured and his job in jeopardy, so he feels sidelined when he's asked to investigate a vicious knife attack on a young woman. But all is not as it seems with his new case, and soon MacReady must put everything on the line in order to do what is right. 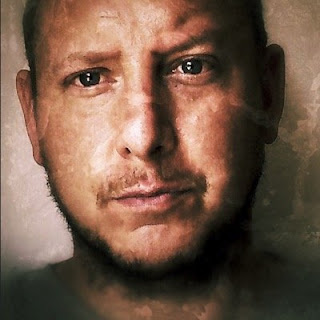 Mike has kindly written a guest post for the blog....

Failing at Your First Book Signing!

You’ve probably seen the photos: Lee Child smiling and scribbling his autograph, queue snaking out of the door. Or Jo Rowling, the local cops shutting down a street so the huge crowd of Potter-mad children can glimpse their favourite author in the flesh for just a few moments.
It’s always the same for us authors. Great fun, and so busy, seeing the people who’ve waited patiently for a couple of hours, in lines that weave around the store’s shelves, so many of them that you can barely…
Oh, wait. It’s not always the same. Nope. Oh no.
Let me tell you about my first book signing.
Picture it: several years ago, a sunny spring day, unseasonably warm. A Saturday afternoon in Cardiff, the Welsh capital buzzing, the first street fair of the year in full swing, lots of events and stalls and people swarming towards them.
So in I go, into the Bookshop I Shall Not Name for my first ever two hour signing session – oh, how excited I was! – for my debut novel, ‘Pocket Notebook’, a darkly comedic tale of a police officer’s downfall. A member of staff greets me and she smiles and points me at my table with all its books (copies of my book, woo!) and a chair and a pen and it looks so lovely then she wanders off and carries on stocking the shelves.
And for the next half an hour – that’s it.
Other than me, and the staff, nobody is in the store. I sit there, pen poised, teeth flashed, face expectant, until the muscles around my mouth start to ache from the effort. Another staff member asks me if I want a cup of tea. I decline, thanking her, and resume waiting.
After forty-five minutes I notice something in the corner of my vision. It appears to be a hand. Yes, it is a hand. Waving. The hand is attached to an arm, an arm that belongs to… my mother.
She is hiding behind a row of children’s books, peering over the top, waving with one hand, giving me the thumbs up with the other. It is surreal. I pretend not to notice her, but then she is joined by my aunt who proceeds to take photographs and gurn and wave also.
I ask for a cup of tea, wishing I could drown myself in it.
On the hour we have a breakthrough: the manager arrives, and he has just that week been transferred to the store, and he didn’t know who I was or that I was even signing books that afternoon, but he is enthusiastic enough anyway and when I tell him nobody has even looked my way he drags me from my chair and starts introducing me to one of the four customers who are now in the shop.
“It’s what you’ve got to do nowadays,” he offers. “Sell yourself.”
The customer, quite rightly, is appalled by the interruption to his peaceful browsing and ignores us both so I return to my chair and curse the good weather and the fair keeping customers away from the shop, while the manager slinks away to ‘file stuff’. Another fifteen interminable minutes passes. My mother and aunt have disappeared and for this I am truly thankful.
Then it happens.
A male and female enter the store, glance about, their eyes adjusting to the interior. They see me. Stare for a few seconds.
Head my way.
He is a police officer, and she a member of support staff. As I am also a cop who’s just happened to have his debut novel published, they’ve made their way to the store specifically to speak to me and get their books signed.
I am overjoyed. So, so grateful. I make small talk, and we smile and giggle and I sign their copies – my hand shakes as I do it – and we talk some more and the man nods at the book – which is scornful of the police hierarchy – and chuckles, ‘Bloody bosses in the job, eh?’ and I laugh and nod and say, ‘I can’t stand any of them, to be honest’ and his companion’s smile falters and he clears his throat so I ask what he does in The Job.
He replies, “I’m the Divisional Commander for Bristol West.”
And that wasn’t awkward, oh no.
So they thank me and leave.
And nobody else turns up.
And the signing is scheduled for two hours and I have half an hour left and I cannot take any more so tell the staff member who greeted me that I am off and I pack my specially-bought man bag and gather my coat and walk out into the sun-drenched pedestrianised street.
I don’t eat much fast food. On the way home I buy two foot-long Subways and shove them both into my face, consoling myself with the thought that even though I have just failed at my first book signing, JK has never enjoyed such an obscene treat.