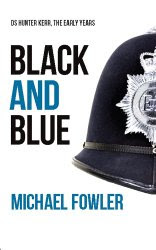 Tormented by the recent bloody murder of his first love, teenager, Hunter Kerr, has but one ambition – bring her killer to justice.

The realisation for him is that in order to do so, he has to become a cop. And, so he embarks on a career which will bring him closer to her investigation.

Though, he has other cases to manage as well, including the brutal attack on an elderly and frail woman, which leaves her at death’s door.

Throwing himself into the investigation, little did Hunter realise that the hunt for her attacker would take him a step closer to being a murder detective.

I’ve not read too many UK-set police procedurals in my crime reading journey, I’m more biased in favour of the US PI or “outlaw” novel, but if this short book is anything to go by I’m missing out.

We pick up with Kerr on the beat during his probation period. He’s mentored by an older cop and shown the ropes, familiarising himself with the local characters on his patrol. He falls victim to the pranks played by other officers as part of his initiation process. There’s maybe a slight element of box-ticking as Kerr is involved in responding to a burglary, a speeding/stolen car incident, a domestic dispute, discovering a dead body, as well as assisting with tedious rounds of door-knocking as the uniforms support CID in a more serious investigation.

Interesting introduction to a young policeman at the outset of his career. After a slow start, Kerr shows himself to be adaptable to the demands of the job. He makes himself useful to his seniors and we get an understanding of his over-riding motivations for joining the police. Grief and anger at the unsolved murder of his girlfriend years previously. I get the feeling that this might be a theme at play in future books.

Enjoyable and a lot worse ways of spending a couple of hours.

Michael Fowler has his website here. Unsurprisingly he was a policeman in his earlier life.

Bought some time ago on Amazon for Kindle.