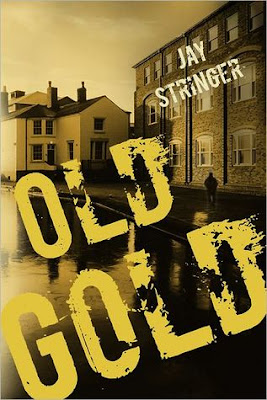 When gangland detective and former cop Eoin Miller wakes up to realize his almost-one-night stand has gone cold as a corpse in his bed, his gypsy heritage screams for him to do the easy thing and run. Having abandoned his morals, ambitions, and relationships for a life of alcohol, denial, and dirty work for local crime bosses, escape seems to be the only option left. But Eoin is surprised by a compulsion to root out his unknown enemies and fight for survival.

All too soon, he finds himself caught in the crossfire between nearly every faction in town: rival crime lords, drug dealers, politicians, cops - even his estranged wife has a card in play. His quest to uncover the truth - and prove his innocence - resurfaces deep pains, old scars, and shattered relationships that threaten to bury him under regret. That is, if the killer doesn't bury him first.

After a bit of a browse on the Kindle, tabbing through pages trying to remember what I had bought and forgotten about, Jay Stringer and his short stories Faithless Street jumped out at me. So I was reading the introduction to them, when Stringer suggests they might be better read in conjunction with the first Eoin Miller novel Old Gold. Well I’m not going to argue with the bloke am I? I read both together.

Faithless Street was on the blog last week – here.

Miller is a gypsy, ex-cop who after a night out drinking and a successful pick-up, wakes with a hangover head which is just about to get worse. His companion from the night before is dead. After a panicky episode when he flees his house, he returns to deal with the situation, only to find the body has disappeared. Someone is obviously intent on messing with him. Flee or fight?
Miller chooses to fight.

Great setting, great main character with an interesting back story…… a gypsy heritage – not without baggage, an ex-cop and an ex-husband too, now dirtying his hands working as a fixer-finder-messenger for one of the local criminal gangs, though he tends to steer clear of the dirtier elements of the job. Well known around town, but with few friends and not much of a relationship with the policewomen ex-wife who’s intent on climbing the career ladder.

It’s hard to define what I liked most about this one. Probably the characters and setting shaded it for me over the plot, but Stringer’s writing and pacing has an easy rhythm that keeps the pages ticking over. Just one more page, ok – I’ll finish the chapter, ok – just one more…….uh – boom! I’ve finished!

Old Gold was bought a year or so ago.