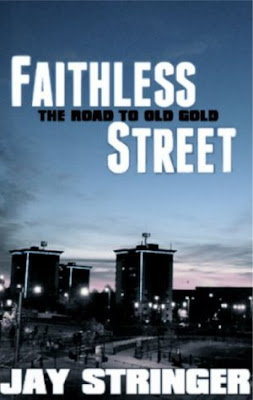 Faithless Street is a collection of four short stories that set the scene for the novel Old Gold. Each story is set in the Black Country, in the English Midlands, and shows glimpses of people’s lives as they try to make ends meet amidst gang life, drugs deals and Gypsy camp evictions.

There’s a piece from author Jay Stringer on his Amazon page that puts some context to his writing and his character Eoin Miller…..

Some people hate their home town, some love it. One way or another we’re all formed by it, and wherever I go, I’m taking the English Midlands with me. It’s like letting the world in on a secret.
It has a population the same size as Scotland, but it doesn’t have a devolved government of its own. It has a strong identity, but also gets buried amidst the media’s attempts to make everywhere into London.

In the Midlands factories got closed. Mines got filled. Generations lost their jobs and their futures. What happens when industry collapses in an industrial region?

Many say there isn’t a gun culture in Britain. If you’ve lived in this area with your eyes open, you’ve seen things that the national press just doesn’t want to cover. There’s been an ongoing gang war in Birmingham for over 20 years. A real war with a real body count. And it's getting worse; where once it was a few gangs fighting to control the drug trade and nightclubs, now it's any number of young men with guns, fighting over streets and post codes.

But you wouldn’t know any of this by picking up any of the nation’s newspapers. There’s nothing in anyone’s interest to report on people dying in the midlands. They’re the wrong class, the wrong colour and have the wrong accent.

The IRA had a strong presence in the area during ‘the troubles,’ but what happened after that? More than once I’ve been in an Irish pub when the man came collecting for ‘the cause.’ The whole world knows the story of how freedom fighters became terrorists, but does anyone want to hear the next chapter?

How about the Asian gangs who grew up in the eighties to defend their communities? Twenty years later they were sitting on top of drug empires and causing trouble for a fresh wave of immigrants. How did that happen? More stories; the pub bombings of the seventies, the race riots of the 80′s, the persecution of the Roma.

I want to write about a place that matters to me and to hopefully make you laugh, make you reel and make you think- after I’ve entertained you. Faithless Street and Old Gold are my attempts at a first person detective story of sorts. Pulp fiction, first and foremost, but they will sneak in some social fiction if you look the other way. It tells of a half-gypsy gangland detective. If you’re a businessman looking to find a statue of a falcon or a family looking for a missing toddler, you need not apply to Eoin Miller. If you’re a drug lord looking for a missing stash, or an illegal immigrant looking to stop a rapist, then he might be the man for you. He is very happy ignoring the world, his friends and his family. He’s doing a very nice job of learning to bury his conscience. He will take your money and find something you’ve lost, and then he will walk away.

Who wouldn’t want to try his stuff after reading that?

Faithless Street - 4 short stories, was read in conjunction with the full length novel Old Gold. Stringer in his intro to the stories suggests reading them at various points during Old Gold, as opposed to zipping through them one after the other. Curbing my natural instincts to get stuck in, I adopted his patient approach.

We encounter some interesting characters in our 4 tales.

Our main man and the central protagonist in Old Gold - Eoin Miller is a gypsy cop. As such he’s an outsider now in his community, he’s disconnected from his family and an outsider in his job – generally loathed and mistrusted and the target of abuse. He’s dating/married to another cop – 2 different stories and 2 different time frames - but they seem to speak a different language to each other. Miller’s smart and observant.

In our other couple of tales, we encounter a couple of low-level drug dealers; one pushing product recklessly because he’s in hock for £7k. The other, Bauser has ambition to move up the ranks into middle management – he’s got to prove himself though. Is wasting his pa a step too far?

Great setting, great dialogue, some of our payoffs are under-stated but pretty much perfect. An author, I want to read more from……oh, I already have.