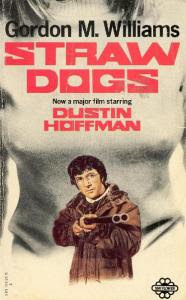 It was a White Christmas. A pet cat was found strangled in a snow drift. A road accident on the moor had set free a notorious child-killer. A mentally defective girl had disappeared from the village party. Snow blocked the country lanes. Telephone wires, blown down in the storm, isolated the village….

A rubbishy reading month ended on a high with this 1969 book, perhaps more famously regarded for the 1971 film – Straw Dogs by Sam Peckinpah with Susan George and Dustin Hoffman than the novel that spawned it.

We have a married couple renting a farmhouse – Trencher’s Farm in the West Country village of Dando. George Magruder is an American professor seeking solitude to finish his book. Louise is his English wife and Karen their young daughter.

Keen to embrace English village life, George embarks on a visit to local pub, where he is ignored by the villagers. Dando is a village with a particular suspicion of outsiders – not just of trans-Atlantic visitors but even folk from the next valley. They look after their own, never more so in the oft-whispered case of what happened at Soldier’s Field when the village men-folk dealt out justice to a village girl’s rapist. Within our community we have some villagers with a less insular view, in particular one of the church elders and the doctor; people who have lived part of their life away from the confines of Dando.

Our sense of isolation becomes more palpable with the on-set of a severe snow-storm which cuts the village off from the outside. The weather contributes to an accident in which an ambulance crashes and the patient, a notorious child-killer - Henry Niles escapes in the aftermath. Niles, himself possesses the mind of a child and is now on the loose with the village boundaries. Throw in a damaged, missing village girl, herself the product of years on in-breeding and the village soon takes on a panicked mentality.

George out driving in the storm, collecting his wife and daughter from the village Christmas party, runs over Niles in the snow and takes him back to Trencher’s Farm to look after him. A call to the police – hours away because of the snowstorm and the village doctor, soon has the local grapevine buzzing and the men-folk up in arms. Missing girl, child-killer on the loose – 2 plus 2 = 5. A raiding party is on its way to Trencher’s Farm and the American who is harbouring the guilty party.

Violent, brutal, gripping, atmospheric. The villagers in the gang display a convincing sense of entitlement and hey you certainly can’t knock their community spirit! From our married couple, we have an already difficult relationship put under extreme pressure. Our marriage is full of discontent and pain, does the approaching trauma cause it to fracture further – beyond repair or does the shared danger bring them together? With our child killer, we see confusion and a lack of comprehension or is this just a mask until opportunity presents itself in the shape of Karen, the Magruder’s daughter?

Interesting also, how avowed pacifist, George almost embraces the physical danger with relish once he has accepted that on this occasion violence must be met with violence.

I purchased a copy of this some years ago second hand online.

My copy depicts Hoffman in a scene from the film. Something I have a copy of but haven’t yet watched. I’ll be interested to see the similarities and the differences. I think originally the film was extremely controversial on release and the subject of some kind of ban and cuts. I believe the film twists the plot-line into once concerning locals and the rape of Louise Magruder as opposed to a vigilante gang targeting a paedophile and child-killer.

This would have been an entry for Rich Westwood’s Crimes of the Century meme in October, but unfortunately whilst I managed to finish the book in the month, my thoughts didn’t make the deadline.

Author Gordon M. Williams hails from Scotland so this one will count towards my on-going three year Scottish Reading Challenge! He's an interesting character having written over 20 novels and for film and television, including an old TV favourite of mine - Hazell. In collaboration with Terry Venables, he penned a few Hazell novels under the pen name P.B. Yuill - I have a couple of them. Read more about him here at his wiki page.
Posted by col2910 at 00:10