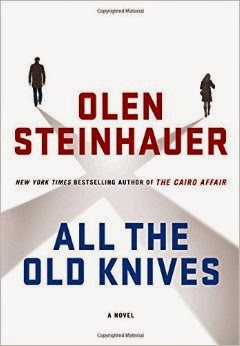 Synopsis/blurb…..
Celia used to lie for a living. Henry still does. Can they ever trust each other? Nine years ago, Henry and Celia were lovers and colleagues, both working for the CIA station in Vienna. Until terrorists hijacked a plane at the airport, a rescue attempt, staged from the inside, went terribly wrong and everyone on board was killed. That night has continued to haunt all of those involved; for Henry and Celia, it brought to an end their relationship. Celia decided she'd had enough; she left the agency, married and had children, and is now living an ordinary life in the Californian suburbs.

Henry is still a CIA analyst, and has travelled to the US to see her one more time, to relive the past, maybe, or to put it behind him once and for all. But neither of them can forget that question: had their agent been compromised, and how? And each of them also wonders what role their lunch companion might have played in the way things unfolded...All the Old Knives is Olen Steinhauer's most intense, most thrilling and most unsettling novel to date - from the New York Times bestselling author deemed by many to be John le Carre's heir apparent.

If only half the books the books I read were as interesting and gripping as this one was, I would have little to complain about in my reading life. Nine years after a plane hijacking in Austria ended disastrously, Henry is investigating why it all fell apart. A visit to former lover Celia, who’s now left this life behind her, is both anticipated and a little bit feared.

Is Henry still a little bit in love with Celia? Who is the mystery man he’s been in touch with ahead of the encounter? Why is the waitress in the restaurant uncomfortable? Will the truth behind the botched operation be uncovered, or do they both already know why it failed and we are merely going through the motions and completing the game of charades?

Quite a short book, but with sufficient depth to feel you know and understand both main characters and their motivations by the end of it. I had my sympathies and favoured Henry over Celia, if I’m honest. Happy ending for both? Read it yourself and see. 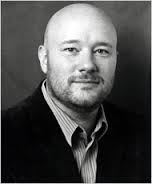 Another Net Galley book from an author who is rapidly becoming one of my favourites.

This is the author’s 10th full length novel. There’s 5 in the Yalta Boulevard loosely connected series. I've read the last 2 back before the blog began. There are 3 in the Milo Weaver series – none of which I have yet gotten to.

The Cairo Affair and the shorter pieces – On the Lisbon Disaster and You Know What’s Going On were enjoyed last year.