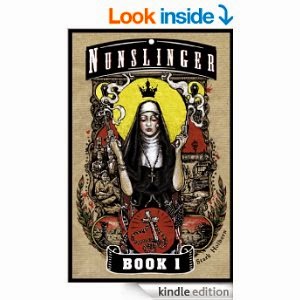 The year is 1864. Sister Thomas Josephine is on her way from St Louis, Missouri, to Sacramento, California. During the course of her journey, however, she'll find that her faith requires her to take off her wimple and pick up a gun. Innocent Visitandine nun Sister Thomas Josephine wants nothing more than an adventure-free journey out west. But adventure is what she'll get - and heaps of it - when she's taken hostage by a desperate outlaw on the Laramie Plains of Wyoming. Before long she'll find herself torn between two men, the handsome Union Army Lieutentant Thomas F. Carthy and the mysterious drifter Abraham C. Muir. And soon, one of these men will be staring down the barrel of her gun. In this exclusive, free, all-new ebook, (no longer free) you'll meet Sister Thomas Josephine, the innocent Visitandine nun, and travel along the overland trail with her as she meets varmints and scallywaygs galore. Nunslinger book 1 is the first in an extraordinary new series that will publish serially throughout 2014.

Only March and I’ve already got an eye on my year-end reading figure. Nunslinger is a book comprised of 12 episodes, so instead of a BOGOF offer I actually get a dozen ticks in the box, and as I’m probably going to split my reading time between this and other stuff, rather than feel overwhelmed by 600-plus pages, it’s only reasonable – especially as you can buy each part on its own.

So initially sucked in by the vivid cover and having a liking for the old West, guns and nuns (my favourite aunt is a nun!), what could be better than a gun-toting nun, in the West a hundred and fifty years ago?

50-odd pages……..we start with a wagon ambush and the cavalry coming to the rescue in the form of Lieutenant Carthy. In the aftermath, our Sister Josephine is kidnapped by a drifter, Abraham Muir. Initially Muir is abhorrent to Josephine, but gradually a bond of sorts develops between then. First impressions give way to a more considered response.

Josephine is warned by Muir that the handsome Union Lieutenant Carthy is not a man to be trusted and if there is anyone with a blackness in his soul, he’s your man. Muir and our nun, get attacked at a trading post, and fleeing with a bullet in his shoulder, into the inhospitable wild lands Muir is destined for a painful death before Josephine using her earlier training as a nun, saves his life, by removing the bullet. A consequence of her actions sees them landing back in the hands of our Union soldiers.

With Muir imprisoned and facing execution, our syphilitic-ridden Carthy decides to give Sister Josephine a piece of something no bride of Christ can countenance. Our nun shoots her assailant and toting a pair of Muir’s guns busts him and an Indian prisoner out of his cell and flees.

Episode two awaits and promises more frolics and adventures……….our nun’s on the run! 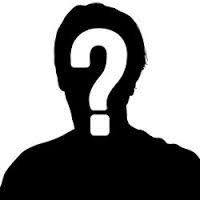 Great setting, great characters, interesting and unusual set-up. I’m going to have a lot of fun reading these I think.

Originally acquired on Net Galley, I let my access expire, fortunately my library had a copy available at another branch that I could borrow.

Stark Holborn is a mystery as an author. I believe he or she is using a non-de-plume and I can find no hints or clues as to the author’s real identity……I’d love to know who it is though.
Posted by col2910 at 01:14