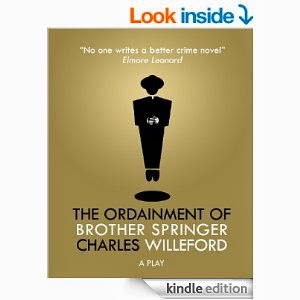 This darkly humorous one act play is a riff on Charles Willeford's "masterpiece" (as it was called by The Washington Post), THE BLACK MASS OF BROTHER SPRINGER. It re-imagines the ordainment of Sam Springer -- a drifter novelist -- as a pastor of the Church of God's Flock in Jacksonville, FL.

“Willeford's experience of his life led him to a certain attitude toward the world and his place in it, and this attitude, ironic without meanness, comic but deeply caring, informed every book he ever wrote, from his two volumes of autobiography through all the unnoticed novels.” Donald Westlake 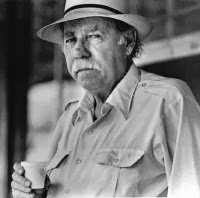 I am a little bit biased towards Charles Willeford.  He is (was – sadly he died in 1988) one of my favourite all-time crime writers. His 4 book Hoke Moseley series - 5 if you count Grimhaven - are some of the best crime fiction books I have read. Over the years I have tried working my way through his back catalogue, much of which was scarcer than rocking horse pooh at one time, but as his posthumous popularity rose is now much more readily available.

The Ordainment is a short one act play. Hard to recommend in truth, probably more for fans who would read his shopping list, if there was one available. That’s me then!

I enjoyed it and was amused and entertained for the half hour or so it took me to work my way through it. Derived from his Black Mass novel, which I have also read albeit many years ago; it mainly served as a memory jog to pick up something of his from the stack of unread books soon. I’ll probably go for The Shark-Infested Custard – how could you not want to read a book entitled that?

Picked up recently and cheaply on Amazon UK for kindle.
Posted by col2910 at 05:24