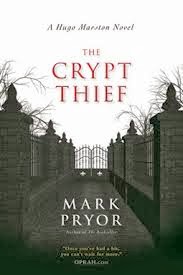 It’s summer in Paris and two tourists have been killed in Père La Chaise cemetery in front of Jim Morrison’s grave. The killer leaves the bodies untouched but moves deeper into the cemetery, where he breaks into the crypt of a long-dead Moulin Rouge dancer. In a bizarre twist, he disappears into the night with part of her skeleton. The cemetery is locked down and put under surveillance, but the thief returns, flitting in and out like a ghost, taking more bones from another legendary can-can dancer under cover of night. One of the dead tourists proves to be an American and the other a woman linked to a known terrorist; so the US ambassador sends his best man and the embassy's head of security-Hugo Marston-to help the French police with their investigation. At first, Hugo is stumped. How does this killer operate unseen? And why is he stealing the bones of once-famous can-can girls? Hugo cracks the secrets of the graveyard, but soon realizes that old bones aren't all this serial killer wants: his ultimate plan requires the flesh and organs of the living. And when the crypt thief spots the former FBI agent on his tail, he decides that Hugo's body will do just fine.

This is the second in a series of three books so far featuring Hugo Marston as a US embassy employee based in Paris. I read the first The Bookseller in November last year courtesy of the publisher, Seventh Street books.

This time around Hugo, as head of security becomes involved in investigating the murder of an American citizen, who happens to be the son of a senator. His dead companion is discovered to be a Pakistani citizen who has entered the country on fake documents and with a suspected terrorist, or at the least – person of interest.

Hugo’s friend, Tom with his oft-hinted at, but never defined role with the CIA is assigned to the investigation. The belief being it is terror related. Hugo and to a degree Tom believe the reason for the murders are less straightforward, especially considering the fact that the killer was responsible for desecrating a grave and stealing some bones. Further thefts of bones occur along with additional killings, as Tom and Hugo conduct the investigation in conjunction with the Parisian police – namely Capitaine Garcia and with input from Hugo’s on/off journalist girlfriend Claudia.

I have probably rushed my summary, partly because I found the plot a little bit too........err, unconvincing. We intermittently follow our killer throughout the book and gradually come to understand what his reasons and rationale are for his actions and what the ultimate intention is for his proposed coup de grace. I was just unmoved by it.

There was still a lot to like about the book. There’s plenty of Paris on show and there’s a familiarity and likeability about the main character Hugo and his friends, Tom, Garcia and Claudia. There’s a lot of banter between Hugo and Tom and the concern about Tom’s health and substance abuse is convincingly presented. I like the recurring characters and enjoy spending time in their company.

Overall – positive points for characters and settings. Less so, for the plot. The investigation was intriguing to a degree as Hugo brought his profiling skills to bear; and remained intriguing whilst there was ambiguity in the enquiry......serial murderer or terrorist angle....the latter part of the book just sort of faded away for me.
Not as enjoyable for me as The Bookseller.

The Bookseller thoughts are here. The third in the series The Blood Promise awaits and will be read in the next month or so.

Thanks to the publisher Seventh Street books for my copy of this.
Posted by col2910 at 01:04