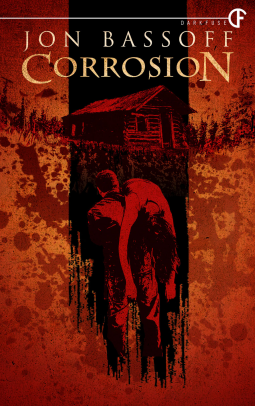 A mysterious Iraq war veteran with a horribly scarred face… A disturbed young man in a strange mountain town… A masked preacher with a terrible secret… Amidst a firestorm of violence, betrayal and horror, their three worlds will eventually collide in an old mining shack buried deep in the mountains. Corrosion, the shattering debut novel by Jon Bassoff, is equal parts Jim Thompson, Flannery O’Connor and William Faulkner, and an unforgettable journey into the underbelly of crime and passion. Drawn from the darkest corners of the human experience, it is sure to haunt readers for years to come.

“Like some unholy spawn of Cormac McCarthy’s Child of God and Donald Ray Pollock’s The Devil All the Time, Corrosion offers pungent writing, a cast of irresistibly damaged characters, and a narrative that’s as twisted and audacious as any I have read in a long while. A dark gem.” —Roger Smith, author of Dust Devils

“Imagine Chuck Palahniuk filtered through Tarantino speak, blended with an acidic Jim Thompson and a book that cries out to be filmed by David Lynch, then you have a flavor of Corrosion. The debut novel from the unique Jon Bassoff begins a whole new genre: Corrosive Noir.”  —Ken Bruen, Shamus Award-winning author of The Guards

“Jon Bassoff gives new meaning to the phrase “Hell on earth” in his debut novel, Corrosion. It’s a harrowing page-turning tale of lost, misplaced, and mangled identity that barrels its way to breakdowns and showdowns of literal and figurative biblical proportions.” —Lynn Kostoff, author of Late Rain

Well if you like your crime fiction on the dark-side of the street, populated by the damaged, the ruined and the damned this offering will probably tick more than a few boxes for you.  No happy souls, happy families or happy endings. Bleak and brutal.

There probably isn't an awful lot more to say. Another debut novel, opened with a little trepidation after reading some of the hype about it. (I've culled half of the plaudits I found praising it to the hilt.) I even had a random e-mail in advance of reading it, telling me to buckle up and enjoy the ride. This was from Jack Reher who has already adapted it into a screenplay.

Superb, but Jon Bassoff has given himself a problem trying to top this with his second book! Roll on Bassoff's next book and hopefully a film of this to follow at some point......oh happy days, oh happy days!

Acquired from Net Galley, a site that is rapidly turning into one of my favourite go to places.