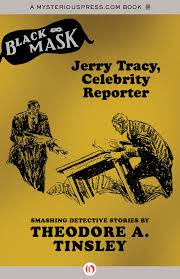 Manhattan’s sharpest gossip columnist tangles with brawlers, triggermen, and dames
The most important people in the world come to Broadway—to eat in restaurants, dance in nightclubs, and die in rain-slicked back alleys. Whatever the big names are doing, Jerry Tracy hears about it—and tells the world in his infamous Daily Planet column. As quick with his typewriter as he is with a .45, Tracy can break a nose as easily as he breaks a news story. But beneath his hard exterior, this columnist has a kind heart, and a sense of justice that will make him do crazy things for a woman in trouble, or a friend with a murder rap hanging over his head.

Featuring every Jerry Tracy story ever published in Black Mask, this collection is an invaluable compendium of one of early noir’s most original heroes. Written in machine gun prose that would make Damon Runyon proud, these stories describe a man whose words are tough—and whose fists are even tougher.

Wow, well I took my time that’s for sure. All 25 Jerry Tracy stories originally published in Black Mask Magazine between 1932 and 1940. The first 7 or 8 stories were all shortish affairs at 20-odd pages each.  The remainder weighed in at around 40-50 pages each. A decent introduction providing a background on the author and the character as well as the magazine, bumped the whole publication up to a page count of 1008.

My reading mojo was kind of thrown off by the sheer magnitude of the task and initially I approached the stories as a reading chore as opposed to being a pleasure. I read the first 3 or 4 at a rate of one per day. Turned away from the tome for a month or so, and then re-applied myself to the task....one a day until finito, missing the odd day here or there as circumstances dictated.

Initially, it was a struggle with the language as Tracy encountered.........darbs, flatties and jaspers.....whilst....the yarn dicked.......someone.....moxed the mope.......and apparently we also met ....the pasty phiz...... and had a Booshwah moment! A translation guide would have been useful at this point!

A bit further in and it all clicked for me, the meanings became apparent fairly quickly and I ended up enjoying this collection a lot more than I expected to. Some of the language used is of its time. Jerry has a Chinese househelp called McNulty, ancestral name Mei-Now-Lee; McNulty describes some of his actions when Tracy was away from his luxury penthouse..........”Make tlenty calls” and “Hab bleakfast. Make tlenty-four. Where hell you go? You dlunk?”

Typically our man Tracy, the hottest gossip columnist on Broadway has his ear to ground and is clued in on what’s happening in the Big Apple. He knows the big-shots, he knows the cops, knows who’s running the rackets. He’s friends with all and gets the juicy news from the street when he encounters bell-hops, doormen, cab drivers, club owners, barmen and chorus line girls.

Tracy’s scrapes involve thwarting blackmail, solving murder, rescuing dames and occasionally running the bad guys out of town; all achieved while penning the juiciest column in town and dodging bullets from the toughs. Nimble on his feet, Jerry allows his fists to do his talking when he needs to. It says a lot for Tinsley’s skills as a writer that no two stories in the collection felt the same.

I was invited to read this collection by Emma of Black Mask/MysteriousPress.com/Open Road via Net Galley.

MysteriousPress.com/Open Road have been busy re-issuing other Black Mask authors in e-book format lately, including Steve Fisher, Norbert Davis and Frank Gruber amongst others.