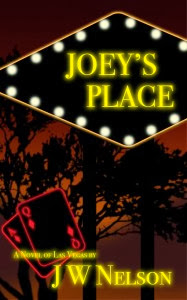 JOEY’S PLACE is a novel about an unknown Las Vegas, when there was still open desert along the Strip, Frank and Dino ruled the showrooms, the casinos took care of their own problems, and the cops just picked up the pieces.  If they could find them. September, 1970. What happens in Vegas stays in Vegas because nobody gives a damn. Then a man with two slugs in his head is discovered in the parking lot of the resort where Elvis is filling the showroom every night. Bad for business. The case should go to the Sheriff’s elite Boulevard unit, but outcast Detective Heber Parkins mysteriously gets the call.  A soft-spoken, hard-headed “Jack” Mormon, Heber usually collects the anonymous victims of the most anonymous town of them all — the waitresses and keno runners who met the wrong man and the card mechanics and grifters who weren’t important enough for a deep hole in the desert and fifty pounds of quicklime.  The kind of job you get when your partners keep getting themselves killed.  That’s all about to change.

Every once in a while you come across a novel that just ticks every box for you. Joey’s Place was such a book.

Our main protagonist, Heber Parkins is a detective with the Clark County Sheriff’s Department. Parkins is disregarded and disrespected by most of the Vegas police. Un-partnered and alone, our”trash-man” is a sympathetic character. Undeservedly maligned, he ends up investigating a hit on a Mormon-family man and part-owner in a casino, under the watchful eye of Captain Carson. Career opportunities beckon for FBI agent Randall if he can shoe-horn, old-time mob man Joey Ross into a cell, for the murder of Joey’s partner.

Trash-man, with Carson running interference on Randall and the rest of the Vegas law enforcement takes the investigation to the heart of the power in the city and the prime mover and shaker, Spencer Lyman. Lyman’s running scared in Trash-man’s opinion and if he can press him, in spite of the Feebs, he can get answers as to why Stan Wallace, a Mormon bishop died, listening to the strains of the Tabernacle choir in his brand new Toronado.

At various points we encounter..........hippies, gamblers, waitresses, barmen, hairdressers, city cops, FBI, Sheriffs, medical examiners, security guards, punks, minders,  mob-types and bosses, Mormons, casino owners and absent bankers........ pragmatists and dreamers, losers, winners, wannabees and victims......everyone trying to get-along, get-by, get-even or get-ahead in a changing Vegas. Some players are happy to maintain the status quo, with the more driven anxious to speed up the changes and see the city re-shaped to suit their design and vision.

My copy of Joey’s Place was acquired directly from the author, after a sympathetic response to my request. Joey’s Place will be available as an e-book in December, just in time for the holidays!
Posted by col2910 at 00:27