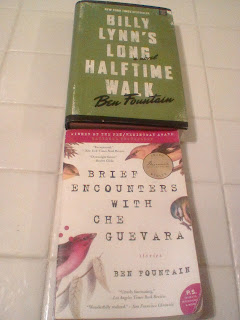 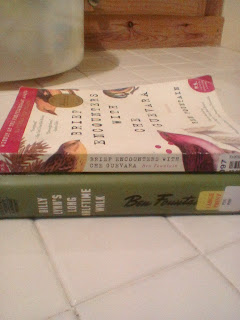 Fountain’s first novel “Billy Lynn” was shortlisted for the 2012 National Book Award as well as scooping a few other trophies.

The “Che Guevara” book which preceded it is a collection of short stories.

I wouldn't bracket them in the crime section of my library, but they both intrigue and interest me and that's the least I would expect from a book prior to opening it. Both garner a fair bit of praise, so whilst they are an unknown quantity at this stage, I'm fairly confident I will be in safe hands when I get around to reading them, sometime this century.

Nineteen-year-old Billy Lynn is home from war. Back in Texas, he has become a national celebrity. A Fox News crew filmed Billy and the rest of Bravo squad defeating Iraqi insurgents in a ferocious firefight. Now Billy is a decorated soldier and Bravo's three minutes of extreme bravery under fire is a YouTube sensation.

Seizing on this PR gift, the Bush administration has sent the surviving members of Bravo on a nationwide 'Victory Tour' to reassure the folks at home. Today, during the final hours of the tour, they arrive at Texas Stadium, guests of honour as the Dallas Cowboys take on the Chicago Bears in a nationally broadcast Thanksgiving Day game. 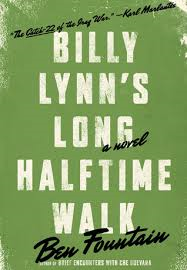 The story follows Billy and his fellow Bravos through a climactic afternoon, as they mix with the rich and powerful, endure the politics and affections of their fellow citizens, aspire to sex and marriage with the famous Cowboys cheerleaders, share centre stage with Destiny's Child during the halftime extravaganza and attempt to close a movie deal with the help of a veteran Hollywood producer. They will learn hard truths about love and death, family and friendship, duty and honour. Tomorrow, they must go back to war.

Tender and full of humanity, this is a wickedly funny and urgent novel about a young man, the citizens who sent him to war, the family he left behind and the era that let it happen. In Billy Lynn, Ben Fountain has created a new American hero for our times.

"* 'This book will be the Catch-22 of the Iraq War. Instead of skewering the military, however, it skewers the society responsible for sending it to war, namely us. This funny, yet totally sobering, dissection of the American way of watching war will have you squirming at the same time you are laughing out loud; Fountain applies the heat of his wicked sense of humor while you face the truth of who we have become' - Karl Marlantes * 'As close to the Great American Novel as anyone is likely to come these days - an extraordinary work that captures and releases the unquiet spirit of our age, and will probably be remembered as one of the important books of this decade' - Madison Smartt Bell * 'Passionate, irreverent, utterly relevant, Billy Lynn's Long Halftime Walk offers an unforgettable portrait of a reluctant hero. Ben Fountain writes like a man inspired and his razor sharp exploration of our contemporary ironies will break your heart' - Margot Livesey"

This debut collection from the man Malcolm Gladwell described as a genius took readers by storm. From the slums of Haiti to a golf course in Myanmar, and from the Colombian jungle to the diamond mines of Sierra Leone, Ben Fountain's impeccable and devastatingly funny stories describe a world in political and social upheaval, and the lives caught in the balance. 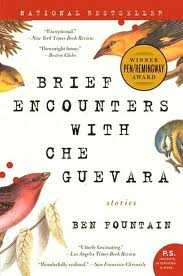 Exceptional . . . Each of these eight stories is as rich as a novel . . . Heartbreaking, absurd, deftly drawn (New York Times)

The work of a very talented writer who is keenly engaged with analysing American identity in the wider world... Beyond the pleasures of Fountain's vivid image-making and fluent storytelling, his collection's great accomplishment is the depth of reality it gives the foreign settings (Chris Power Guardian)

It is such an unexpected joy, in this age of introspection, to discover an American writer with a global outlook (Jim Crace, author of BEING DEAD)

A collection of stories dealing with moral choices, with the complexity of what being decent can mean . . . It's funny. And human. There's no pretense or cleverness - it's just a beautiful book (Boston Globe)

Fountain prowls similar turf to that of Tom Bissell, Gary Shteyngart and even early Thomas Pynchon . . . an impressive performance from an author with a gift for reaching into the past and producing something compelling and new (Los Angeles Times Book Review)