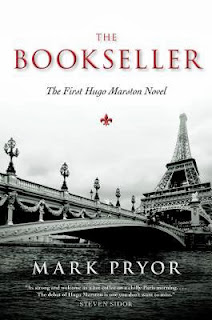 Who is killing the celebrated bouquinistes of Paris?

Max-an elderly Paris bookstall owner-is abducted at gunpoint. His friend, Hugo Marston, head of security at the US embassy, looks on helplessly, powerless to do anything to stop the kidnapper.
Marston launches a search, enlisting the help of semiretired CIA agent Tom Green. Their investigation reveals that Max was a Holocaust survivor and later became a Nazi hunter. Is his disappearance somehow tied to his grim history, or even to the mysterious old books he sold?

On the streets of Paris, tensions are rising as rival drug gangs engage in violent turf wars. Before long, other booksellers start to disappear, their bodies found floating in the Seine. Though the police are not interested in his opinion, Marston is convinced the hostilities have something to do with the murders of these bouquinistes. Then he himself becomes a target of the unknown assassins. With Tom by his side, Marston finally puts the pieces of the puzzle together, connecting the past with the present and leading the two men, quite literally, to the enemy's lair.
Just as the killer intended.

Another new author, another interesting mystery this time set in present-day Paris.

We have a main character; Hugo Marston. Marston is getting over the failure of his second marriage. He’s decent, conscientious and is portrayed in a sympathetic light. He looks out for his friends and is loyal as well as capable. Our tale begins with Marston buying a couple of collectible books from a bookseller along the banks of the Seine. Max, the seller and Hugo have become friends after numerous sales, chats and drinks during the period Hugo has been stationed in Paris. Shortly afterwards, Max is taken from under Hugo’s nose and disappears. When the police appear lack lustre in pursuing the disappearance and subsequent booksellers also disappear, Marston gets involved to try and get to the bottom of things.

Several other characters are introduced to us along the way; Claudia – a journalist with contacts inside the Gendarmerie; Tom – ex-CIA and a friend of Hugo’s;  Gravois – head of the bouquinistes, Gerard de Roussillon – old French moneyed, book collector plus a few other minor players.

As Hugo’s inquiries gather pace, hindered in part because of the difficulties in a US attaché actively pursuing an investigation in Paris; several possible rationales for the crimes arise.........drugs, the bouquinistes’  future or Nazi collaboration during the war.

Overall the characters were fairly interesting. The plot was plausible, though there were a few minor gripes that I would have a little bit of a problem swallowing en masse. There was enough smoke and mirrors exhibited by the author to ensure my interest sustained itself until the end. We had some decent banter and inter-play between the main characters; especially Tom and Hugo. There was a bit of love action between a couple of players and well-written scenes involving derring-do and action and a there was a decent sense of place. The scenes along the banks of the Seine were particularly evocative.
I’m kind of oscillating between a 3 and a 4 for this one. Did I want to stop reading at any point.....no. Did I care about the outcome....yes. Would I want read more from the author....yes. Would I recommend it to others....yes, on the proviso that it isn’t the perfect book, but overall an entertaining and satisfying read.

Okay it’s a 4 from 5.
Thanks to Meghan at Seventh Street books for my copy of this one.

Pryor has written two subsequent Marston books. The second – The Crypt Thief – came out earlier this year and the third entitled The BloodPromise, which is due out January, 2014. I will get to them both soon.
As a last note, the author did raise an inadvertent chuckle. Pryor is a former UK journalist, now residing in Austin, Texas hometown of Lance Armstrong. Marston exhibits great pride when the Hotel Crillon flies the Texan flag in celebration of Armstrong’s 7th victory in the Tour de France.