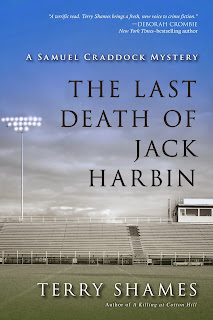 The shocking murder of a wounded veteran challenges the investigative skills of ex-chief Samuel Craddock.

Just before the outbreak of the Gulf War, two eighteen-year-old football stars and best friends from Jarrett Creek, Texas, signed up for the army. But Woody Patterson was rejected and stayed home to marry the girl they both loved, while Jack Harbin came back from the war badly damaged. The men haven't spoken since. Just as they are about to reconcile, Jack is brutally murdered. With the chief of police out of commission, it's up to trusted ex-chief Samuel Craddock to investigate.

Against the backdrop of small-town loyalties and betrayals, Craddock discovers dark secrets of the past and present to solve the mystery of Jack's death.

Well earlier this year I unearthed a real gem in Terry Shames’ debut novel A Killing At Cotton Hill. The author introduced us to a fictional small town in Texas called Jarrett Creek and the engaging and interesting company of the retired police chief, Samuel Craddock.

Her second outing for Craddock is just as interesting as the first with the same blend of small-town intrigue and murder. Craddock is called upon again to investigate the brutal murder of a disabled war veteran, shortly after he suffers the loss of his father.

Craddock in the hands of his creator, Terry Shames is sympathetic, decent and caring. Always striving to do the right thing and determined to restore some equilibrium to his home-town by ensuring the culprit is caught. A quiet and thoughtful mystery that has me hoping for more of the same in the future.

At 260 pages long, the book was an ideal length to race through in a couple of days reading. No extremes of violence or language employed by the author, just a pleasurable reading experience.

Fractionally or slightly less enjoyable than the first, for some indefinable reason, that I’m unable to pinpoint.........why is that(?)....... but still highly recommended. (Maybe I’m just reluctant to accord a fifth 5 star rating in the same month!)

My review of A Killing At Cotton Hill is here.

The Last Death Of Jack Harbin is released in January, 2014. Thanks to Meghan from Prometheus/Seventh Street Books for the ARC.