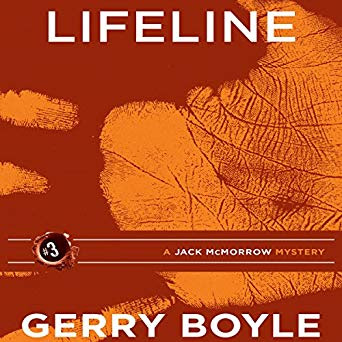 Synopsis/blurb ...
The tendency toward mayhem that follows Jack McMorrow like a shadow finally sends his girlfriend Roxanne fleeing to the relatively stable urban center of Portland, leaving Jack to nurse a sore heart and mull an ultimatum alone in the wilds of Maine. In an effort to clean up his act, Jack takes a job as a courthouse reporter for the Kennebec Observer. What seems like a safe choice becomes dangerous when Jack is drawn into a domestic abuse case that leaves a woman dead and McMorrow tangled in a messy web of innuendo, conflicted emotions, and mortal danger. It’s time for Jack to grow up, but can he do it? Is it his destiny to follow his subjects into a life of rancor and violence, or will he be able to escape the call of his darker side and find some measure of peace?
Lifeline is the 3rd book in author Gerry Boyle's Jack McMorrow series. McMorrow is a former New York Times reporter, who is now living in Maine, with his days of burning ambition and career building behind him. He still has a nose for a story though.
McMorrow takes a part-time gig as a court reporter for a local paper. His first report concerns a domestic abuse victim who is seeking the court's protection from a drunken boyfriend. Boyle's report on Donna Marchant, ruffles a few feathers at the newspaper, with the powerful local prosecutor who seems to run the court as her local fiefdom and with the boyfriend himself.
Threats of violence follow and after an escalation involving further menace - physical and verbal - to Donna and McMorrow,  Donna winds up dead. McMorrow feeling compelled by guilt and a sense of responsibility continues the search for answers, not believing the police narrative of the boyfriend's obvious guilt.
I found this book a lot more absorbing and interesting than the first couple in the series. This time around we either get where we're going a bit quicker, or maybe I've gotten used to Boyle's storytelling and was invested enough in the tale to enjoy the journey.
I like McMorrow as a character. There's a tenacity and resilience about him. He's experienced and very capable as a reporter, which isn't necessarily the kind of journalist which the Kennebec Observer is looking for. The editor just wants to do non-reporting and to ruffle no feathers. Jack's style isn't a good fit and serves to enliven the local newsroom. He's loyal to his girlfriend, who incidentally has just moved further away from him for work purposes. He's feeling a bit abandoned here and is jealous of the new friendships his girlfriend is making in Portland. He does also have a fondness, if not exactly a reliance on a beer or two at the end of a day.
McMorrow tackles the boyfriend, the victim's sister, and the ex-husband in a bid to get to the truth. He does the hard yards tracking down witnesses and accounts which the police don't seem to have covered. He stands up to bullies and intimidation and eventually uncovers the truth behind Donna's death.
I liked the twists in the story. I had a feeling the outcome was heading in a certain direction, but Boyle wrong-footed me while keeping the outcome plausible. I enjoyed the narration from Michael A. Smith.