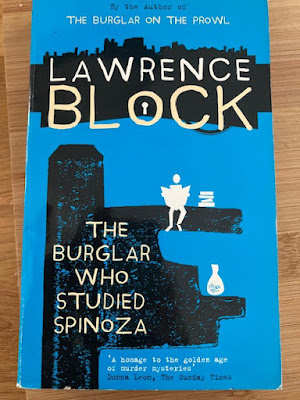 Synopsis/blurb ...
Bernie Rhodenbarr is after the prized coin collection of one Herb Colcannon and he has the inside information to help him liberate it ... or so he thinks! But the Colcannon house is a set-up and he's not the first to think of the heist. What's more the collection consists of just one coin ... worth over $250,000 ... so who is Bernie going to sell it to and how is he going to get away with it?
Another enjoyable outing in the company of Lawrence Block, Bernie Rhodenbarr and best friend sidekick, Carolyn. Well, I think it was enjoyable as I can't actually recall too much about it a little more than six weeks after reading it.
Hmm. either I read too much and things kind of blur into one, particularly as it was the fourth Bernie book in a matter of a month and I've since read another three in the series, or I have to accept that I'm getting on a bit and my memory is diminishing. I can't recall feelings of boredom, disappointment or anxious page counting until the end.
Anyways, it was Lawrence Block and never having encountered a book of his I didn't enjoy, a good time was almost certainly had.
Bernie, a coin to steal and a burglary and something inevitably going pear-shaped.
Block's trademark wit, characters, New York setting and an entertaining if not gripping story were undoubtedly present. I like the lighter touch of the Bernie books compared to the Matt Scudder series. I like them both equally though. I don't have a favourite, I can just enjoy the differences between the two while savouring an author who never lets me down and has a multitude of strings to his bow.
4 from 5

The first three in the series were - Burglars Can't Be Choosers, The Burglar in the Closet and The Burglar Who Liked to Quote Kipling. Hopefully I can remember more about the next one when I come to pen a few thoughts.
Read - August, 2022
Published - 1980
Page count - 224
Source - owned copy
Format - Paperback
Posted by col2910 at 05:22