FÉLIX SÉGUIN and ERIC THIBAULT - INSIDE THE MONTREAL MAFIA (2022) 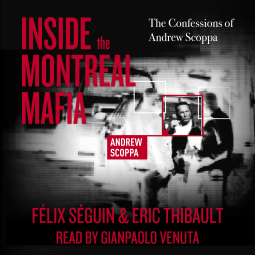 A groundbreaking, exclusive inside look at the North American Mafia and the Rizzuto family

For the first time in Canadian history, a high-ranking mafioso agreed to break the code of omertà by talking to journalists. From October 2014 to October 2019, Félix Séguin and Eric Thibault held multiple secret meetings with Andrew Scoppa, getting an exclusive inside look at the inner workings of the North American Mafia. This book is the culmination of their perilous investigation. It sheds light on the life — and death — of one of the most influential organized crime figures in recent years.

At exactly 2 p.m., there was a knock at the door. It was him: the source every journalist dreamed of having. The short man was armed and placed his gun on a table.

“Are you impressed?” he asked with a broad grin.

Before me was Andrew Scoppa, close confidant of the late mafia boss Vito Rizzuto, international heroin trafficker and cold-blooded killer.

An okay splash of true crime which I enjoyed, but perhaps not as much as I had hoped to. Two journalists meet with a key Montreal Mafia man over a period of about five years until he was gunned down. Andrew Scoppa and his brother were leading players in Montreal’s criminal underworld. Both died violently.

Scoppa unburdens himself to the journos, documenting feuds, vendettas, and schisms in the organisation. Most of the book concerns the death of A, B, C etc arranged by X, Y and Z on this date, that date, at such and such a place. After a while the names become a blur and are indistinguishable from each other. Scoppa never actually confesses to playing a role in any of the killings. It’s more a kind of oral history of who did what to whom and when.

One thought struck me. Law enforcement could have diverted resources away from Organised Crime surveillance and monitoring and just left them alone to kill each other, until it was a case of last man standing. The organisation was riven by rifts, and jealousy, and disputes and a constant jostling for power. It seemed like they spent more time battling each other than they did making any money.

There’s talk of the importance of control of ‘the book’ which was the major revenue source – illegal sports betting. The profit margin and risk was a lot better and lesser than the danger and profit margins inherent in dealing drugs. Some of the margins Scoppa reported on for kilos of cocaine seemed really tight, even for a wholesaler. (Not that I've ever wholesaled drugs.)

I expected there to be some time spent discussing protection schemes and prostitution, but these topics never came up. Scoppa tried to use his journalistic contacts to try and glean police information and similarly the police tried to see if the journalists were feeding back to Scoppa, by planting false information to see if they were playing one off against the other. The journalists kept a straight bat.

The most interesting part of the book for me was the evolving relationships between various players in the underworld – the Hells Angels, the Rock Machine Motorcycle Club and the Italian families. There was an out and out war between the biker gangs for several years from the mid-90s to the early 00s which resulted in about 160 deaths. Incredible really. At various times the Hells Angels were in alliance with the families and worked for them, other times it seems as if the Angels were the ones on top.

Scoppa often seemed discontented with his life of crime, but never actually made the effort to give it up to try lead a normal life with his family, probably far away from Canada. Eventually he becomes another victim of the violence.