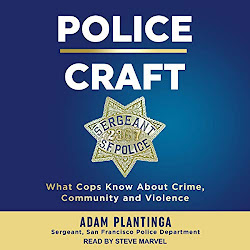 Synopsis/blurb...
A veteran police officer gives his thoughtful, balanced views on police shootings, racial profiling, community relations, and every other aspect of policing―and he’ll change what you think about the police. From the author of the acclaimed 400 Things Cops Know, Police Craft is a thought-provoking and revelatory examination of policing in America, as seen by a working police officer. Adam Plantinga, a 17-year veteran sergeant with the San Francisco Police Department, gives an inside view of the police officer’s job, from handling evidence and conducting interrogations to coping with danger, violence, and death. Not hesitating to confront controversial issues, Plantinga presents the police officer’s views on police shootings, racial profiling, and relationships between police and the community―and offers reasoned proposals on what the police and the public can do better.
A bit of non-fiction with some reflections on policing in the community from a serving sergeant in the San Francisco Police Department.
Thoughtful, topical, interesting, and entertaining, even though not all of Adam Plantinga's attempts at a bit of brevity hit the mark. I was interested in what he had to say and it was good to get a perspective on modern policing in the US from one of the boys in blue.
He discusses training, tactics on the street, interviewing techniques, evidence gathering, protocol, family, neighbourhoods, public interactions, cameraderie, experience and how the job changes people, 9/11 and a lot more besides.
Most of the times you read about the police in the US and the UK, where I live, it's because of some catastrophic event, usually a failure - an abuse of the power entrusted to them, an over reaction to a protestor, or the use of racial profiling in stop and search tactics disproportionately affecting minority communities and racism in the ranks, not always punished by the authorities. In the US, it will often be because of a controversial and always saddening fatality.
You don't very often read about the vast majority of serving officers, who do just that - serve their community. Plantinga tells their stories and presents examples of his colleagues that have gone above and beyond during his years of service.
He doesn't shy away from condemning the rotten eggs that we've heard about though he perhaps comes across as a bit defensive at times of his colleagues. That said I don't envy the job he or his colleagues does in serving the public. What's the saying? Unless you've walked a mile in another man's shoes....
Educational, informative and a really worthwhile read with a great narration from Steve Marvel. 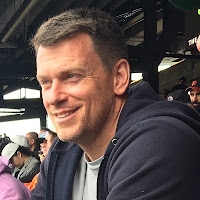