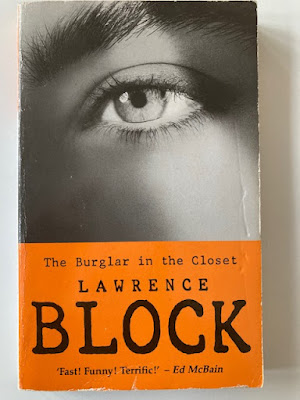 It was ridiculous really – there was Bernie Rhodenbarr, pro burglar, locked in the clothes cupboard of a smart New York apartment while he was thieving it. And there was his stash of jewels, all neatly packed, not in hand or at hand but on the opposite side of the bedroom. So by the time Bernie finally picked his way out he wasn’t too pleased to find the rocks gone and their beautiful ex-owner, Crystal Sheldrake, lying dead on the mat with a gleaming steel instrument embedded in her heart. The cops weren’t too impressed either …

This is the second Bernie Rhodenbarr book and another fun read. Another score of Bernie’s goes awry when his latest burglary at the behest of his dentist of all people, ends up with Bernie again departing the scene with a corpse left behind him. The corpse in question is his dentist's ex-wife. The dentist during police questioning naturally fingers Bernie as the possible killer.

Bernie with the assistance of the dental receptionist (also his dentist’s current dalliance) turns amateur sleuth again as he has to unravel the late Crystal Sheldrake’s bed partners and try and recover his swag.

Bar hopping, art galleries, artists, lawyers, more burglaries, a familiar patrolman, New York nightlife, and something a lot bigger than a bit of breaking and entering.

Really enjoyable. As an aside, Bernie’s occupation seems to be NYC’s worst kept secret. A fact which undoubtedly leads to more scrapes in future books.

Burglars Can’t Be Choosers was enjoyed earlier this month. I’ll be starting the third one soon.