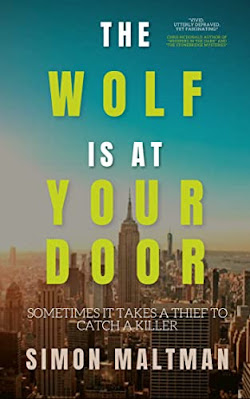 Synopsis/blurb....
New York, 1987. Rory is a likable career thief originally from war-torn Belfast, planning out his next big score. A serial killer is murdering women in the city. But no bodies are ever found; just missing girls and cryptic plaques left on benches in Central Park. When the killer strikes too close to home, Rory becomes unhealthily obsessed with tracking him down. The cops begin to suspect Rory due to his lengthy criminal history, the press just want a sensational story, Rory’s partners in crime don’t want any heat, and the killers flourish in the chaos. “Sometimes it takes a thief to catch a killer”
I'm a fan of author Simon Maltman's work, having read and enjoyed a few of his books previously. I'm not such a fan of the serial killer trope in my reading. There are a couple of exceptions. I enjoyed Thomas Harris's early books and I've enjoyed the odd John Sandford - Lucas Davenport Prey book over the years. Most of the time though, they just bore me. Murder as a consequence of a burglary, or a bank robbery gone wrong or as a political act, or for family reasons I can vibe. The twisted killer who kills and kills and kills because of some nefarious plan or mental health issue. No thanks.
Here we have a merging of two types of crime fiction - the heist novel and the serial killer book. Main character Rory, an Irishman in New York, pulls jobs with a small crew of guys. For his next caper, he brings in sometimes associate, Alice. In the planning stage, they get a bit closer personally, until out of character she stands him up. In a separate storyline, our killer has been capturing and killing young women and leaving poetic placques on the benches in Central Park. Not quite sure why to be honest.
The police don't appear to have an active investigation going, despite some publicity in the media over the placques because they don't have any bodies. Rory concerned over Alice's disappearance and the latest bench sonnet, goes to both the cops and the press and as a consequence gets some heat from his criminal associates, leading to a falling out among our thieves.
We have an ongoing amateur investigation, of sorts, though we have the ear now of a sympathetic cop and a journo and we have our up and coming criminal caper and we have a close brush with the killer. In conclusion, all the stars align, all the components collide and we have an explosive finale.
Overall I liked it, I was never bored, but again the serial killer thing just isn't my vibe. I have to give Maltman some credit for trying something a little bit different though.