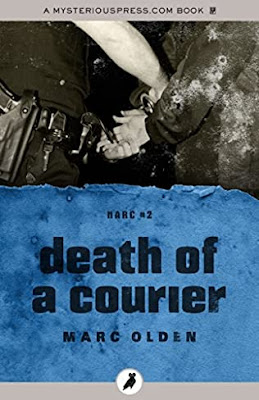 To break the mafia, Bolt must face his murderous ex-partner.

Narcotics agents aren't supposed to ride horses. But today John Bolt is tailing a drug courier in Central Park, and in two feet of snow, horseback is the only way to ride. When he hears the pop-pop-pop of a .32 pistol, he knows his man is dead. Bolt charges to the scene, and the gunmen open fire. They kill his horse, and Bolt avenges the animal. As one of the killers bleeds into unconsciousness, he says they were sent by Apache.

Apache. Codename for Paris Whitman, a former top man in Bolt's department who flipped to the other side. Now a mafia enforcer, Apache is working his way up the mob ladder by targeting his old colleagues. Once, he and Bolt were partners. Now they fight each other in a duel to the death that will determine whether the trickle of drugs into this country stops, or becomes a flood.

Death of a Courier is the second of nine books featuring John Bolt, a narcotics agent. I enjoyed the first, Narc a few months ago.

New York and a 70s setting and vibe (unsurprisingly as it was written and published then), drugs, violence, conflict between rival gangs for control of the market, and a former agent turned rogue, after an undercover operation went horrifically wrong. Paris Whitman aka Apache felt abandoned by his colleagues and has gone over to the other side, vowing vengeance on those he felt failed him. `

Best book ever? No, but enough in the storyline that kept me invested and entertained. The events that caused Paris to turn against his employers are quite brutal and disturbing. Olden writes some muscular prose at times.

I like John Bolt as a main character. He's quite happy to meet fire with fire when confronted by danger and imminent violence. Not especially a shoot first, ask questions later policy, but if it's a case of them or him, it's definitely going to be them.

I'll be back for the third in the series when time allows, which is one benchmark of whether I've enjoyed a book or not? Do I want to read more from the author and this series? In this case - yes.