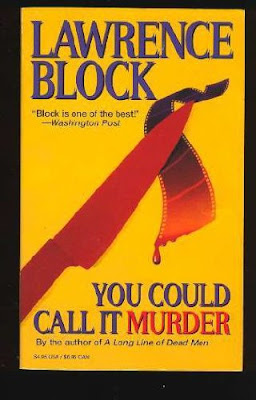 A missing person case brings private eye Roy Markham to the remote winterbound college town of Cliff’s End, New Hampshire, but what began as a routine investigation quickly becomes dark and dangerous. Six pornographic photos and a tidy little blackmail scheme result in a brutal and baffling murder, and no one is safe, especially Markham himself. Lawrence Block’s energetic storytelling and drop-dead dialogue will whisk fans through this suspenseful tale, right up to its unexpected ending.

An early Lawrence Block PI novel which has seen the light of day under two (possibly three) different titles. Markham, on its original publication in 1961. You Could Call It Murder in 1987. (Fantastic Fiction has it titled as The Case of the Pornographic Photos.)

Roy Markham is a PI. He’s also a family friend of Edgar and Marianne Taft. Daughter, Barbara has gone missing from her New Hampshire college and not wanting to involve the police, Edgar wants Roy to investigate. Roy heads north. A day or so later, he’s called back. Marianne’s corpse has been fished out of the Hudson, suspected suicide. Edgar Taft won’t accept it and wants Roy to keep digging.

I quite like this one. I liked the investigation, the twists Block threw into the plot, the secondary characters, the slow unpicking of events and the tables getting turned on Markham as he becomes the hunted. Marianne isn’t coming back, but Markham gets painful answers for the family. There’s a final little bump in the book which I think will stay with me for a while.