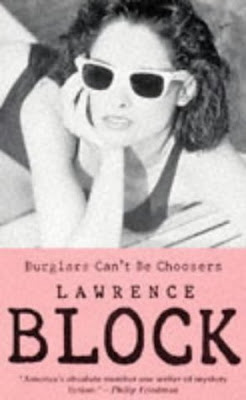 Synopsis/blurb....
Introducing Bernie Rhodenbarr, New York City's prince of thieves, who really should have known better!
When the mysterious pear-shaped man with a lot of uncomfortably accurate information about Bernie and his career offered him five big ones to liberate a blue leather box - unopened - from an East Side apartment, it would have been a good time to please a previous engagement, but times were tough.
Everything was straightforward; the box was where it should have been, but before the liberation two men in blue coats turned up. Still all was not lost, there was always a way to work things out... That was before they discovered the body in the bedroom and Bernie decided to leg it!
When I got wind of a new Bernie the Burglar book from Lawrence Block dropping in October this year, I thought it would be a gas to try and get all the existing series books - 12 in all - read before enjoying the new one.
Burglars Can't Be Choosers has been read before - back in 2011. I think I've grown into Lawrence Block's work over the past decade and probably enjoyed it a bit more second time around. (Goodreads tells me I scored it a 3 from 5 when I added it to my Library there in 2013.)
Light and humorous. Bernie Rhodenbarr is a gentleman burglar, deploring violence or strong arm tactics. His profession has seen him incarcerated before and he's a dab hand at making licence plates. As such he is well known to the New York cops and patrolman Ray Kirshmann in particular. Ray and his partner interrupt Bernie in the course of his latest job. Recovering a special box for a promised $5k. Bernie is in the course of paying them off with his retainer, before Ray's partner finds a dead body in the bedroom. Bernie panics and flees.
Now he's in the newspapers and on the TV and he's wanted for murder. Refuge in an out-of-town acquaintance's apartment offers him a chance to catch his breath and make a plan. An unexpected, plant watering visitor drops in, they connect and despite knowing a few things about each other, as well as concealing a few things, Bernie and Ruth try and figure things out. Two heads being better than one.
Good fun, plenty of twists and turns and some amateur sleuthing before Bernie gets to the bottom of the mystery and catches a murderer.

An entertaining and enjoyable series opener.
Roll on The Burglar in the Closet!