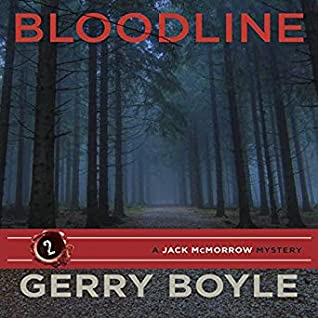 Synopsis/blurb ....
Hoping for a fresh start and a clean slate, McMorrow has a new home in the cheerful-sounding town of Prosperity, Maine. But nothing ever goes easy for Jack, so when a freelance gig leads him to a teen mother and some high school hooligans, it's not child's play. A girl is murdered and Jack's investigation places him squarely in the killer's sights.
My second time around with author Gerry Boyle and his investigative reporter, Jack McMorrow. I'm happy to declare that I enjoyed it a bit more than my first pedestrian outing, Deadline. Perhaps my expectations were lower, or maybe the pace wasn't quite so sedentary.
McMorrow is hired to write a piece on teenagers in the area .... low expectations, poverty, lack of ambition, lack of opportunity, delinquency, pregnancy, teenage parents, thirty something year old grandparents with the following generations repeating the cycle.
After a run in with a gang of lads - one in particular not too impressed as what he perceives is an outsider judging them - and lasses, he has a name to follow up on - a girl who despite an alcoholic feckless mother and an absent father, broke the cycle. She fell pregnant herself, had the baby, gave it up for adoption and went off to college to build a life. He contacts her, they talk.
In the meantime, McMorrow's house and vehicle are attacked in a drive by shooting and an arson attack. McMorrow feels the incidents are connected to the run in he had with the local youth. This reader didn't and was kind of frustrated at what I perceived as McMorrow's denseness. Maybe because I knew the book still had 7 or 8 hours to run and Jack didn't have that knowledge?
The girl he interviews gets dead, accidentally or not and McMorrow gets sucked into a police investigation where he feels like he is a suspect. He has a physical altercation with the guy he rowed with. Other things happen .... he carries on researching his article, he gets stonewalled by a fair few people, the dead girl's relatives subject him to some intense scrutiny, then satisfied want him to carry on digging and his on/off romance from the series opener with a woman who's name I forgot is resurrected.
I actually quite liked this. I enjoyed the dynamics of McMorrow's relationship with his friends up the road. They're good people who look out for him. I liked his interactions with the cops and I enjoyed the slow reveal as to what happened and why, even though I had twigged the raison d'etre for events. I knew the why, just needed to wait for the who.
Better than the first book and I'm quite positive about continuing with the series at some point. Lifeline, the third in a series currently running to a dozen books will be the next one up.