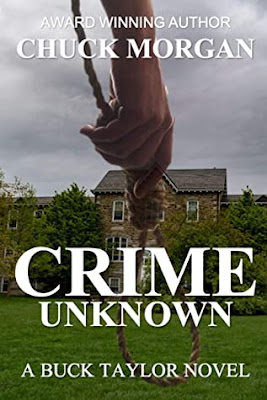 Synopsis/blurb ....
CBI agent Buck Taylor is back in book 7 of the CRIME series by Chuck Morgan, 2020 Pacific Book Awards Best Mystery Winner for Crime Denied (Book 5).
Copper Creek, Colorado is a picturesque mountain town that is home to an exclusive private college, and that backs up to Rocky Mountain National Park. On the outside, it appears to be a peaceful town. The perfect place to raise a family, but underneath, Copper Creek holds some dark secrets.
When the body of a young black student is found hanging in the basement of one of the college buildings, Colorado Bureau of Investigation Agent Buck Taylor and his team are sent to Copper Creek to investigate the apparent suicide. Was this just a suicide or could it be a possible hate crime? With little cooperation from the local authorities, Buck's investigation leads them to some startling conclusions about the suicide and uncovers a criminal enterprise that has been going on for over a hundred years. An enterprise that will rock this idyllic town to its core.
Second time around for me with author Chuck Morgan and his main series character, Buck Taylor. Crime Unknown is the 7th in the Taylor series. Crime Exposed, the 4th was enjoyed last year.
Taylor is sent into the small town of Copper Creek to investigate the supposed suicide of a black student who was found hanging. As a reader we already know the death wasn't suicide, but murder. Taylor quickly encounters resistance and obstruction in his efforts to take a look. He receives a warning from the local police chief who wants him gone in 24 hours and his every move is surveilled. Spidey senses alerted, Taylor thinks something is seriously wrong with the town of Copper Creek.
I quite enjoyed the set-up and Taylor and his team's efforts to unpick the truth about the supposed suicide and the town's secrets in general. The plot is a slight stretch insofar as serious corruption and wrong doing could conceivably be kept under wraps for so long, with so many people party to it. My other minor gripe was Buck Taylor himself. He presents as just a little bit too much of a Peter Perfect character ... no flaws, no vices, no failings, no weak spots. He's a bit too good to be true.
Those little niggles aside I really enjoyed this. I liked the investigation, the conflicts throughout, the uncovering of current and historical crimes and the eventual solution with answers and outcomes to all the questions posed. There's a lot more going on that the covering up of a student's death.