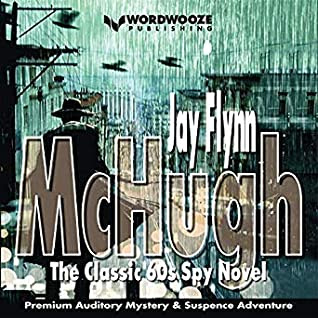 Synopsis/blurb ...
The 1960s' toughest, brainiest, sexiest, and most compassionate spy, is back in print!
Meet McHugh America's#1 Secret Agent a combination of Mickey Spillane's Mike Hammer and Ian Fleming's James Bond. Like 007, he has an ultra-sophisticated taste for the finest liquors, food, cars, ladies, and hand-tailored suits. Like Hammer he can pound the toughest thugs teeth in with a single punch, bounce back from the most vicious beatings, carries the biggest hand gun around, and isn't slow to use it, and has the most extraordinary gal pal ever.
In this first book in the series, McHugh takes a leave of absence from his spy work to help out his lover's sister who has found a dead Mafioso in her apartment, her boyfriend missing, and half San Francisco's mobsters after her.
But soon, the twisting trail leads back to his home base, and he finds the case involves not only the Cosa Nostra but has a government aspect as well and is ordered back in service by the General who commands his loyalty. Foreign killers, Mafia Killers, it's a killer of a plot involving millions of dollars in stolen gold, international smugglers, and enough shootouts to send 007 screaming into retirement and frighten Hammer into surrendering his PI license. And then there is Loris. What can we say about Loris? You will have to listen about her for yourself. Move over Velda. Make room Moneypenny. There has never been a woman like Loris before. Or a hero like McHugh. You won't be able to wait for his other adventures. They are espionage classics from the Golden Age of the '60s!
Not having read any of Mickey Spillane's Mike Hammer or Ian Fleming's James Bond books I'm unsure if Jay Flynn's 60s spy-cum-investigator-cum tough guy, McHugh is harder, faster, quicker or sexier than the other two action men, but I am willing to concede that he's good company.
Here he gets the runaround chasing down his girlfriend's sister's boyfriend, who has gone AWOL.
A missing boyfriend, one who works for the US Government on secret techno-stuff, debts, cops, corpses, mob types, PIs, bars, cars, TV hosts, FBI agents, beatings, shoot-outs, car restorations and a historic robbery with the loot still missing. It's a busy book, plenty of action and nothing too taxing on the brain.
It's entertaining pulp, definitely a bit dated which is reflected in some of the attitudes on display. McHugh gets backs into town and in one conversation with his girlfriend, Loris she mentions that he has trysts when he's away. She's accepting and tolerant of it, as opposed to pissed and reaching for the garden shears. I think the world (some of it at least) has moved on in the last fifty years.
That said I liked it, but it probably won't live too long in the memory banks. I do intend listening to more of the five book McHugh series on Audible in the future.
Theo Holland's narration, as ever is excellent.
3.5 from 5
Read - (listened to) June, 2021
Published - 1959
Page count - 134 (4 hrs 21 mins)
Source - Audible purchase
Format - Audible
Posted by col2910 at 05:27