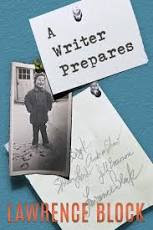 Synopsis/blurb ....
Sometime in 1953, I knew with unusual certainty what I intended to do with my life. I would become a writer.
By the time I was 25, I had published more than 50 books. Most of these bore pen names, and for a time I resisted acknowledging my early pseudonymous work. Then, in one astonishing and feverish week in 1994, I recalled those early years in 50,000 words of memoir.
A publisher contracted to bring out my memoir once I'd completed it. Instead I put it on a shelf and never looked at it again. Early in 2020, I had a fresh look at A Writer Prepares. By the time I was ready to stop, I'd written about my life as a writer well into 1966, when I'd completed The Thief Who Couldn't Sleep.
A Writer Prepares, an examination of the first quarter century of one writer's life, is arguably the work of two writers. There's the middle-aged fellow who wrote about half of it at a blistering pace in 1994, and there's the octogenarian who finished the job another quarter century later. The older fellow brought less raw energy to the task, and his memory is a long way from infallible, but one can only hope he's offset these losses with a slight edge in judgment, in perspective, in maturity.
Unfortunately, I'm unable to bring an unbiased view towards this book. I absolutely love this man and his incredible body of work. It's probably safe to say I've read more of his books than any other author living or dead. That said I don't think I've loved all his books equally, a couple have irritated me along the way, but - the majority..... hell yeah, give 'em to me again.
In A Writer Prepares, mostly written over 25 years ago, Block recounts tales of his upbringing, his parents, education, college life, Buffalo, New York, his ambitions, his early writing and sales and his time spent working with Scott Meredith - a New York writing agency which he soon came to understand was little more than a con game designed to part would-be-authors from their money. There's life after Meredith and the transition from pseudonomously written pulp and erotic novels to finding his own voice and what he feels is his arrival as a proper established writer. We also learn a bit about his first marriage and fatherhood as well.
Some of the anecdotes and reminiscences have been shared before elsewhere, but it's not something I could ever get tired of hearing about. The main focus of the book though is the journey as a writer, with the personal snippets offered somewhat grudgingly to provide context for certain decisions taken and paths followed. I can understand and respect that public figures have private lives and not everyone wants or feels the need to unburden themselves.
I think my unashamed admiration for Block as an author, has me hanging on every snippet of information he chooses to divulge whether it's about his life as a writer, hanging out with fellow authors, or a walk around a neighbourhood. I would be entertained reading Block's shopping list.
The man's an absolute treasure, legend, icon and the fact that he's still going strong at nearly 84 is inspirational.
A Writer Prepares was really enjoyable and not just one for the fans.
5 from 5
Mr Block has been read many times before. The good news is, I've as many from him on the TBR pile as I've actually consumed. Let the good times roll....