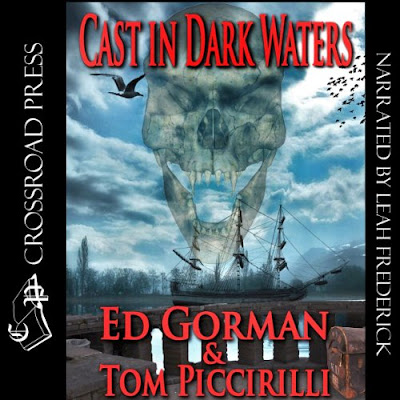 Synopsis/blurb ....
Her name was Crimson...and she was a legend. A beautiful pirate queen who plundered the 16th Century Caribbean sea by day and confronted voodoo and vampires during the steaming tropical nights.
Cast in Dark Waters is an original dark adventure tale by Ed Gorman and Tom Piccirilli.
This will be a Crossroad Press production.
A collaborative effort from Tom Piccirilli and Ed Gorman and one which while not actually disliking wasn't really my vibe.
Pirates, the Caribbean, Virginia, London's East End, an absent daughter and a mercenary rescue mission to a haunted island populated by supernatural non-human beings.
Conflict, battles, negotiations, arguments, family dramas, loss, bereavement, dreams and nightmares.
The story was entertaining enough without ever feeling like I was overly interested in the outcome.
The writing was good, the story was alright, the character's were interesting enough. A week or so on from listening to it, I can't say I've remembered too much finite detail and in another week or so's time I'll probably forget everything about it.
There's worse ways of spending two hours of your time andat least I won't die wondering about what I might have missed.
3 from 5
Gorman and Piccirilli have both been enjoyed in the past. Too many times to mention. No doubt I'll enjoy them both again in the future. Hopefully with a tale more firmly rooted in reality and the crime-mystery-thriller genre.