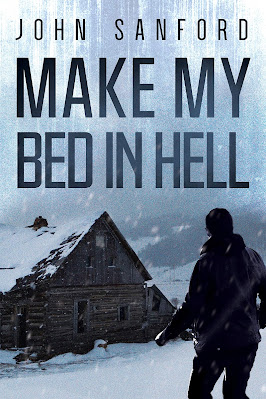 Synopsis/blurb ....
Aaron Platt has spent every day of his life breaking his back to scrape a living from the rocky, played-out fields of the Adirondack farm he inherited from his sadistic father. One winter morning, he follows footprints in the snow to his barn and discovers a man freezing to death in a horse stall. What unfolds between the two men, past and present, is a brisk, gritty depiction of crime and punishment. But their harrowing story is more than that, exposing the shocking hypocrisy of the people who live in the nearby, bucolic town—a legacy of hatred that reaches back to the violent founding of the nation.
This literary masterpiece, back in print for the first time in over 60 years, includes a new Afterword by Jack Mearns, author of John Sanford: An Annotated Bibliography
"A first-rate story of violence and congealed hate." New Republic
"The story is electrifying." Saturday Review of Literature
"A brief, fast book, and those pages are terse. Sanford has injected the drama of spilled blood that made America." Los Angeles Times
"An unusual book with some brilliant pieces of writing, exceeding Celine and Faulkner in depravity and language." Kirkus Reviews
A depression era tale of hardship, poverty, resentment, cruelty and violence which I liked even if I didn't fully understand everything the author was trying to convey.
In the middle of the book is a long winding poem (16 pages or so) which recounts America's bloody past. (Thanks to the afterword from Sanford scholar, Jack Mearns for a heads-up.) I suppose my lack of knowledge on early American history (I'm in the UK) might be a hindrance towards comprehension, or maybe I'm just thick. The tale told here, could be a reflection of America's violent history, but on a more personal level.
I enjoyed the story which is relayed in a non-linear fashion and which you kind of have to work at to un-pick. I read the book about a month ago and details are fading, but there is conflict at it's core.
Sex, history, jealousy, bullying, small mindedness, morality, farming, family, schooling, abuse, death, consequences. Probably a lot more besides.
I think I may have to re-read this one at some point to better understand it, which would be no major imposition. I think I was surprised by how graphic some of the details were. It seems very ahead of it's time for an eighty year old book.
A book I enjoyed, even if I'm at a loss to articulate exactly why.