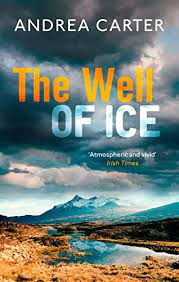 Synopsis/blurb .....
December in Glendara, Inishowen, and solicitor Benedicta 'Ben' O'Keeffe is working flat out before the holidays. But on a trip to Dublin to visit her parents, she runs into Luke Kirby - the man who killed her sister - freshly released from jail. On the surface he appears remorseful, conciliatory even, but his comment as she walks away makes her realise he is as foul as ever.
Back in Glendara, there is chaos. The Oak pub has burned down and Carole Kearney, the Oak's barmaid, has gone missing. And then, while walking the dog up Sliabh Sneacht, Ben and her partner, Sergeant Tom Molloy, make a gruesome discovery: a body lying face down in the snow.
Who is behind this vicious attack on Glendara and its residents? Ben tries to find answers, but is she the one in danger?
A bit of Irish crime to brighten up an otherwise dull and dreary month, with a series book from Andrea Carter - The Well of Ice.
Small town, coastal setting, amateur detecting, a secret (not really a secret) romance, a missing person, a fire, a dead body, Christmas and New Year, tangled family histories, community, wills, inheritance, death, disappearances, imprisonment, children, an unwelcome blast from the past, control, manipulation, investigation and outcome.
I enjoyed this one. I like the main character. I've seen her likened to a modern day Miss Marple and despite only ever reading some short stories featuring the character, I get the reference and think it's quite apt.
Ben O'Keeffe is a bit of a shit magnet and can't help but be drawn into the problems of other people. As the local solicitor she's the confidant of many and her relationship with the local cop kind of draws her closer to police investigations, though her fella does his best to keep her out of things. Unlike Marple, she actually is the target of one of the other characters in the books. Their connection and history is frequently referenced, so not having previously read any of the earlier books, wouldn't be a hindrance to enjoying this one.
While O'Keeffe is the focus of some of the events in this books, her discovering the body of a missing woman, gives us other things to ponder.
Great setting, decent plot, a busy book, lots going on, satisfying outcome.
4 from 5

Treacherous Strand, an earlier book in the Inishowen Mystery/Ben O'Keeffe series has been enjoyed before. The next in the series, Murder at Greysbridge waits on the kindle.
Read - May, 2021
Published - 2017
Page count - 336
Source  - purchased copy (Net Galley previously, but link expired before I read it)
Format - paperback
Posted by col2910 at 00:10