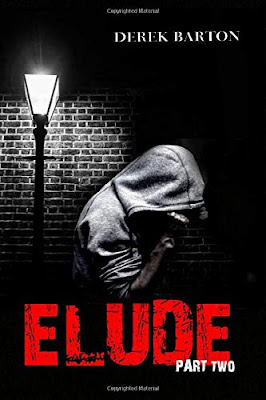 Synopsis/blurb....
Stepping blindly into a horrific murder scene, a young ex-con, Vicente Vargas, must flee from the police while eluding the real killer who continues to pin more bodies on him in this intricate cat-and-mouse game. Cut off from all friends and family, tried and convicted by the press, Vic must survive on his wits and cunning on the gritty streets of Phoenix, Arizona long enough to clear his name.
Second episodic outing in Derek Barton's Elude series. So two down and one to go.
Truthfully, I didn't enjoy it as much as the first. The set-up is intriguing .... a young Hispanic kid, one who has made mistakes is framed for several murders and on the run. Also sucked in is a young teenage girl who has some hacking skills, but is also being manipulated and framed. The two have teamed up together.
Part two, sees one of the two detectives on the case killed, while the second is harbouring doubts about Vargas' guilt because everything seems too neat, too packaged, too easy.
We get a glimpse as to who is behind events and how it is being done, which is where the book went pear-shaped for me. Not my cup of tea, not my thing at all. It's a journey into mind control and psychic abilities and loads of other stuff that I just don't believe in, have any time for or have any real interest in reading about.
I did enjoy the characters in the book. I like an underdog or two trying to battle difficult odds. I liked the narration, which injects a real urgency into the narrative. It's just the turn the book took which disappointed me.