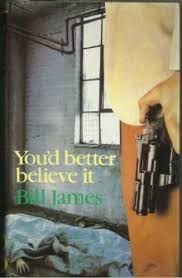 Nominated for England's Crime Writers' Association Gold Dagger Award in 1986, You'd Better Believe It introduced Detective Chief Superintendent Colin Harpur to reader in England and the United States. Harpur's domain is a small seaport city south of London. It's not unusual for the big-town criminals to consider such a spot as easy prey. At such times a policeman must rely keenly upon his colleagues, to be sure, and also upon his retinue of narks (tipsters). This time it's a Lloyd's Bank branch that's the target. When the heist is postponed, a policeman is killed. One nark, then another, is murdered. As Harpur becomes driven to his limit, he must bypass regulations and settle things once and for all with a vicious crook named Holly. But not necessarily on his own terms.

The first in the author's thirty-plus long Harpur and Iles series and a re-read after first enjoying this one back in January, 2007. I'm guessing that the series comprises straightforward police procedurals with recurring characters as it goes on, but here in the opener we have a maverick cop trying to get to the bottom of a potential big robbery on his turf - a robbery which he views as a personal affront. So who knows what the rest of the series will bring.

A big heist, an outsider firm, planning, secrecy, informers, a false alarm, pressure from the higher-ups, a missing cop, an attractive wife, a dead body or two including a cop, a big cheese gangster, an off the cards meeting, a disagreement, breaking and entering, favour for favour, the robbery and the aftermath.

Great 80s time frame, a quirky writing style which demands you pay attention, off-beat humour, a roguish main character and a gripping story which maintained my interest throughout, before a decent conclusion. I'm interested in reading the second in the series sometime soon. (I'm definitely not leaving a 13 year gap before inevitably having to read this for a third time.)

Bill James has been enjoyed before, apart from this one...... Noose, Hitmen I Have Known and The Squeeze (as David Craig)