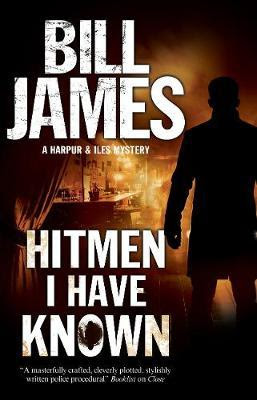 Assistant Chief Constable Iles finds himself suspected of murder in the fast-paced 35th installment of the popular Harpur and Iles police procedural series.

Tensions in the community are mounting following the gruesome deaths of two men, both of whom were accused yet acquitted of the murder of an undercover police officer. It looks like vigilante justice, but who is responsible? Alarmingly, suspicion falls on Assistant Chief Constable Iles.

Matters escalate when a TV show investigating the murders is aired, further implicating Iles. Iles seems at ease with the accusations, as are his superiors in the police force. But others are not feeling so secure.

Local crime bosses Ralph Ember and Mansel Shale fear reprisals against Iles will result in their own businesses suffering. And so they begin to plan how to remove potential troublemakers from their path . . .

I'm pretty sure I have read the first in this series a fair few years ago and at one time I harboured delusions of reading the whole series, probably when he was on about number 20, maybe 15 years ago. Since then at a pace of about one a year, this 90 year old author (or thereabouts) has sped further away from me.

Here we have our long-running double act, Harpur and Iles pondering an upcoming TV documentary-cum-dramatisation where a thinly veiled accusation of murder will be aimed at Iles.

Our book concerns the fall-out from that and the effect it has on Harpur; his daughter's - one of whom, Hazel seems to have an infatuation with ACC Iles, which may have been inappropriately reciprocated at one time; Iles's pregnant wife, Sarah - who Harpur had an affair with previously and also a couple of local villains who's day to day activities are tolerated by Iles in a tacit policy of laissez-faire, Iles's overview being - better the devil you know in respect of criminality in the community.

I took a while to warm to the book, mainly because of the author's narrative style which is fairly distinctive and instantly recognisable - it is if you've read him before of course. I wouldn't say he talks in riddles, but he demands that you pay careful attention to his words.

There's a fair bit of humour in the book and I get the impression the author had some fun writing it. At one point, Harpur meets a confidential informant at a secluded location and almost gets more than information. The back door of their car opens and a hopeful, randy stranger hops in full of anticipation for the three way tryst that is sure to follow. The fellow departs, nursing hurt feelings and wounded pride before getting reinvigorated by the stranger who drops into his own car.

There's some fun with the villains too. One of whom, Mansel Shale is rather rashly contemplating shooting the TV crew as a means of removing the threat to Iles. The other, Ralph Ember a nightclub owner and more, fancies himself as a Charlton Heston lookalike, back from the days when Charlton was a good looking chap (and not overly obsessed with polishing his gun collection). Self-obsessed and vain, Ralph lives in a cocoon, imagining that everyone he meets has the same regard and high opinion of him, that he holds for himself. He is slightly more rational than Shale, but it's a close run thing.

Once I got into this, I really enjoyed it. There's an ambiguity about the conclusion that worked well for me, a sort of did he, didn't he that's unresolved. It's not something I usually enjoy but here it makes sense.

I liked the participants, the premise, the humour and the pace. I really need to cut down on the new books and concentrate on reading more from the existing stockpile, including Bill James. Maybe I'll get a couple of these read before number 36 drops.

Noose, a standalone from Bill James was enjoyed back in September, 2013. I hadn't realised it was quite so long since I read him.