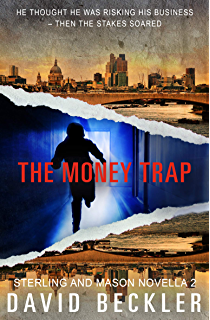 Ex-Royal Marine Byron Mason is used to fighting for survival, but when he comes up against Gideon Metzler, a ruthless financier, he’s out of his comfort zone.

He’s building a successful business to support his growing family and stretches his resources to land a big contract. When Metzler puts pressure on him, he worries if he’s made the right decision. But these opportunities don’t come along every day.

After a series of misfortunes, he finds himself fighting for the future of his business. He has to dust off old skills whilst trying to master those he needs to survive in a new environment he discovers is as ruthless as any he’s encountered.

Alongside Adam Sterling, an old comrade, he begins the fightback. But, outnumbered and outgunned, will the two of them survive against a determined enemy?

Then Metzler makes an offer which will make his problems disappear.

Byron has to choose between the safety of his family and doing the right thing.

My second encounter with David Beckler's Mason and Sterling after reading Forged in Flames a few days before this. Where Forged in Flames related more to Sterling, here our main focus is Mason, with Adam Sterling having a walk on part in the latter part of the book.

Work issues abound. Mason is expanding his company and has perhaps borrowed a little bit  recklessly - increasing his staff levels and cost base, before embarking on a lucrative security contract. He won't see any payment from the contract for a little way down the line. In the short term he's in a bit of a hole.

An incident with one of his new recruits on his big job puts immediate pressure on the business. His wife is heavily pregnant - a further worry. His financiers suddenly start playing hard ball. A former soldier from his past puts in a reappearance. His calm and control seems to be deserting him and doubts creep in about his right hand man. Just because you're a bit paranoid, it doesn't mean someone isn't out to get you.

And rest assured someone is out to get him.

Industrial sabotage, blackmail, threats to livelihood, threats to family ........ and a fightback with best friend, Sterling appearing on the scene.

Fast-paced and enjoyable without being the best book ever. I like the main characters and the way they bounce off each other. We get some of their shared history in a flashback to their service days. I quite liked the set-up and development of the plot. There's an inevitability about the outcome, insofar as you expect the duo to come out on top and that balance will be restored to their world and without spoilers that does happen, but it's an entertaining outing getting to that point.

I look forward to seeing this pair again in Brotherhood - the author's first full length novel.