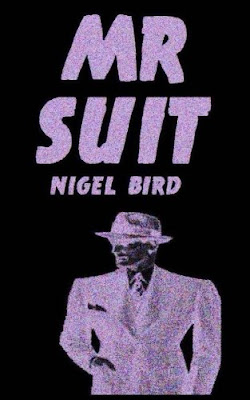 Liza is at the end of her tether. The only way she can see out of her situation is to turn to her husband's ex-boss, the gangster Mr Suit, for help.

In doing so, she sets in motion a chain of events that will keep the reader on the edge of their seat from beginning to end.

The latest in the series of tremendous work from the author of DIRTY OLD TOWN (AND OTHER STORIES); IN LOCO PARENTIS; and SMOKE who is also the co-editor of volumes 1 and 2 of PULP INK.

'The prose is tight rope taut and the plotting first class. The central character of Liza is well drawn and the drip feed of her commentary about Archie’s feelings is brilliantly done. Mr Suit is suitably odious without straying in to cliché...‘Mr Suit’ is a tense and thrilling novella which deserves a place on your bookshelf.' Crimesquad.com

A read in one sitting novella, which without being the best book ever was entertaining enough and kept me amused Saturday afternoon while keeping one eye on the football scores.

Archie used to work for Mr Suit, before his involvement in a botched kidnapping saw him receive a bullet in the head, albeit accidentally from his boss - but not before he had managed to stash the quarter of a million ransom.

Archie wants out of his life, which in his locked-in state is understandable. Liza, his wife is thinking the same thing, but doesn't want to do the deed herself, so turns towards Mr Suit. Everyone's in agreement, until the angel of mercy arrives to do the deed, while Archie is in the middle of painstakingly communicating to Liza - by blinking out letters - the whereabouts of the ransom money. Events now take a very different course.

Humour, violence, sex, ambition, plans, London setting, a canal trip, a family - not all of whom are reading from the same script and an outcome which maintains the status quo for one of our characters.

Engaging, entertaining, funny, never less than interesting. If I was being picky, I could maybe say the timing of one event was remarkably convenient in terms of the plot, but hey it didn't mar my enjoyment.

I do need to read more from Nigel Bird.

Previously enjoyed - BEAT ON THE BRAT (AND OTHER STORIES) and SMOKE